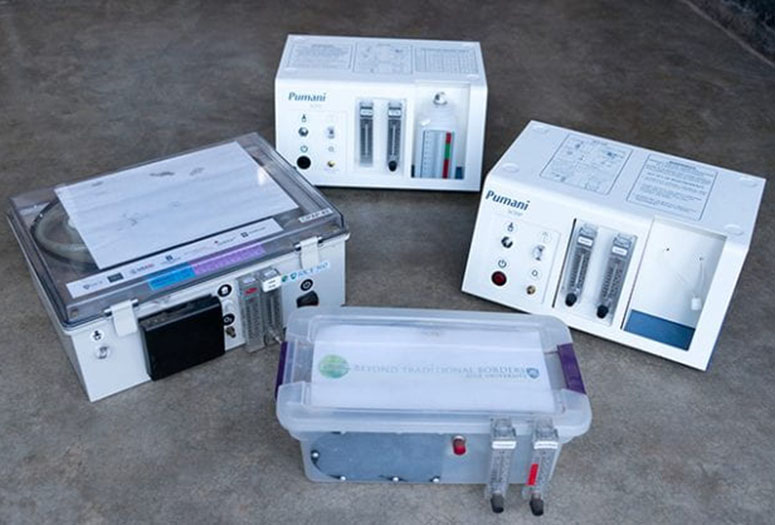 A life-saving device that got its start in an engineering classroom at Rice University 10 years ago, the low-cost Pumani CPAP today is helping newborns breathe easier in 35 countries and has impacted the lives of nearly 1 million babies and their families.

In recognition of the rapidly approaching milestone, the Pumani and its creators at the Rice 360° Institute for Global Health have been named to Global Innovation Exchange's Million Lives Club, a development initiative that celebrates innovations and social entrepreneurs whose inventions have directly or indirectly impacted the lives of 1 million or more people who live on less than $5 a day. The honor was announced today at Devex World, a leading global development conference that is being held virtually because of the pandemic.

Almost half of childhood deaths occur in the first four weeks of life, and acute respiratory infections are the leading cause, accounting for 30% of deaths within the first month of life. Most of these deaths can be prevented with machines that provide "continuous positive airway pressure," a gentle flow of air that keeps lungs inflated.

"We know in high-income countries how to treat respiratory distress in preterm infants — with either oxygen or CPAP," said Rice 360⁰ Co-director Maria Oden, a bioengineering teaching professor and director of the Oshman Engineering Design Kitchen in Rice's Brown School of Engineering.

CPAP machines are standard kit in neonatal intensive care units, but hospitals in less affluent countries and communities cannot afford CPAP and other basic NICU technologies. The resulting disparity in infant mortality is stark: A newborn in sub-Saharan Africa is nearly nine times more likely to die within her first month than a baby born in a community with a NICU.

"We set out to develop CPAP technology that is affordable, rugged and effective with our partners in Malawi, a country that has the highest rate of preterm birth in the world," Oden said. "Doctors and nurses have been providing lifesaving care to newborns using Pumani since we worked in partnership with the Malawi Ministry of Health to scale it to every district and central hospital in 2013."

Based on an idea from Rice engineering students in 2010, Pumani costs about 15 times less than a traditional CPAP. Named by nurses in Malawi, Pumani is a Chichewa word meaning "breathe easy." The device was developed by Rice 360⁰ and partners, including the medical device company 3rd Stone Design and doctors, nurses and government health officials throughout Malawi.

With funding from Saving Lives at Birth, the U.S. Agency for International Development, ELMA Philanthropies, GlaxoSmithKline and Save the Children, Pumani was rolled out to 36 regional and district hospitals throughout Malawi between 2013-2016. 3rd Stone has also sold more than 1,000 units to hospitals in 35 countries.

"While respiratory distress is common among premature babies, so are other conditions like hyperthermia and jaundice," said Rice 360⁰ Co-director Rebecca Richards-Kortum, Rice's Malcolm Gillis University Professor and professor of bioengineering. "Malawi's national adoption of Pumani highlighted the need for a comprehensive set of affordable NICU technologies and catalyzed the founding of NEST360⁰, an international effort launched in October 2019 to slash newborn deaths in sub-Saharan hospitals by 50%."

The Million Lives Club initiative is inspired by members of the International Development Innovation Alliance and is supported by many of the world's leading development organizations. For more information, visit millionlivesclub.org.

Devex is a media platform that connects and informs more than 1 million professionals who work in global development, global health and the humanitarian and sustainability sectors.