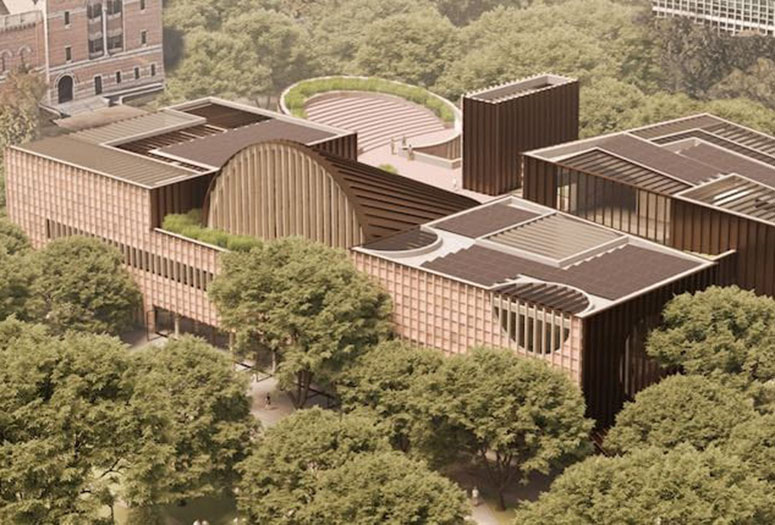 Rice hopes to break ground on the project in the first quarter of 2022. Current plans are for a few elements of the RMC – the chapel and the cloisters – to remain, while the majority of the RMC would be demolished to make way for the new facility. Anticipated completion is in the fall of 2023.

The architect’s winning concept lays out a three-story, 80,000-square-foot structure that incorporates the functions at the RMC, along with a Multicultural Center and a rooftop auditorium.

“We could not be more delighted than to have a design architect of the standing of Sir David Adjaye and Adjaye Associates for Rice’s new student center,” said Rice President David Leebron. “Building on the insights of Rice graduates at his firm, Sir David’s competition submission reflected a deep understanding of the needs of our student community, including the need to support diversity and inclusion through a vibrant and prominent Multicultural Center that is a central element of this project.

“Sir David’s global perspective will, we are confident, result in a project that speaks not only to our community but to the broader world that increasingly sees Rice as a destination for global engagement and problem-solving,” he said.

Adjaye Associates was among three finalists to present concepts remotely for the new facility. They were narrowed down from a longer list of candidates by the Board of Trustees’ Buildings and Grounds Subcommittee for Design. The winner was selected by a committee of Rice administrators and faculty, with input from the Rice Student Association and Graduate Student Association, to begin the preliminary design process.

University Architect George Ristow said such a competition for a major building at Rice is unprecedented. “We hosted a design competition, which is not something Rice typically does for a major capital project,” he said. “Their concept is strong and it’s something we are very excited to pursue, but the design itself is very preliminary right now.”

A gift of $15 million from the Brown Foundation made it possible to move the project forward, according to Kathi Dantley Warren, vice president for Development and Alumni Relations. Houston-based Kendall/Heaton Associates will serve as executive architect, and Tellepsen will provide preconstruction services, Ristow said.

The new facility will incorporate one important facet of the current RMC, a memorial to 10 Navy ROTC students who died when their transport plane crashed in 1953 and for whom the building is named.

The building will be the second at Rice to be designed by a winner of the Royal Gold Medal, selected by Queen Elizabeth II on behalf of the Royal Institute of British Architects. Adjaye, founder and principal of the firm, was recently named the 2021 recipient of the award, which honors those who have had a significant influence on the advancement of architecture.

The first Rice building by a medalist was the 1981 addition to Anderson Hall by James Stirling.

“We are extremely humbled and honored to have won the competition to design the new student center at Rice University,” Adjaye said. “This is an important and inspiring project for Adjaye Associates and we look forward to collaborating with Rice to imagine a new campus anchor point that engages its community in the most inclusive way possible.

“Responding to the architectural history of the university, the city of Houston and the region, the student center will come to embody its position at the heart of the campus, fostering catalytic connections between undergraduates, graduates, faculty and staff activated in both the threshold and formalized spaces of the new building,” he said.

Adjaye Associates, with offices in Accra, Ghana; London and New York, is best known for the stunning Smithsonian National Museum of African American History and Culture in Washington, D.C. Other projects include Ruby City, an art center in San Antonio; the Moscow School of Management Skolkovo, Russia; and the Nobel Peace Centre in Oslo, Norway.

An architectural rendering of Adjaye Associates’ winning proposal for a student center to replace Rice Memorial Center. The university hopes to break ground in the first quarter of 2022. (Credit: Adjaye Associates) 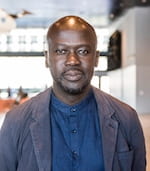