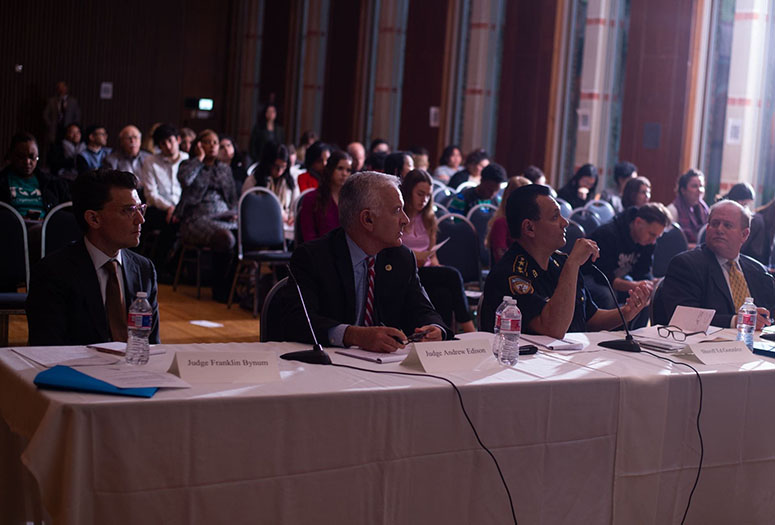 One of the toughest public policy issues of our time was tackled by teams of Rice students who gathered to pitch their ideas on how to improve criminal justice policy in the Houston area.

The event wasn’t a classroom exercise. The students presented their plans to a panel of the area’s top criminal justice authorities who awarded cash prizes to the top three teams.

“The issue of criminal justice has captured national attention in recent years as people begin to understand the insidious effects of mass incarceration,” said Emma Young, an economics and social policy major and one of the student coordinators of the event. “Here in Houston we’ve seen major reform. However, Harris County’s criminal justice system continues to experience many of the same problems that are plaguing jurisdictions across the country.”

The HPC is hosted each year by Rice’s Center for Civic Leadership (CCL), whose mission is to foster civic leadership and enable students to understand the complexity of social issues, their roles as active members of society and the mechanisms for achieving equitable and inclusive communities. CCL’s director, Elizabeth Vann, works with Rice faculty, staff and students and community partners to develop academically grounded learning experiences and partnerships between the university and the community.

"We have a wide range of participants from across the university, many of whom are competing for the first time," said student coordinator Ashley Nguyen, a sociology major who plans to pursue a career in criminal justice. "In addition to the panels we've put on, the other student coordinators and I have worked with Dr. Vann to provide three advising sessions for each team to guide them through the process and provide feedback.”

After each presentation, the panel of judges had a few minutes to ask questions or offer insights. At the end of the night, the judges picked their top three proposals. “New Path: Pre-Trial Diversion for Harris County Mothers” by Connor Rothschild and Allison Yelvington took first place and a $500 prize; “Transitional Healthcare to Reduce Recidivism Rates” by Phoebe Lovejoy, Becca Mak, Nicolas Martinez and Carla Sipahioglu came in second and received $250; and “Safe Syringe Exchange” by Aaron Pathak, Krithika Shamanna and Gavin Voss placed third and won the audience choice vote, which earned them $100 and $200 respectively.

The presentation by Rothschild and Yelvington explained how incarceration of a mother can be a sentence for her children as well. Without rehabilitation programs, these mothers can become stuck in a cycle of recidivism. Their plan focused on providing assistance with housing, drug and trauma treatment and employment and education support.

“The hard work paid off,” said Rothschild, a social policy and political science major. “Every single team that performed was just so good. We’re super impressed by everybody and we’re super thankful to everyone, especially with such an impressive judging slate.”