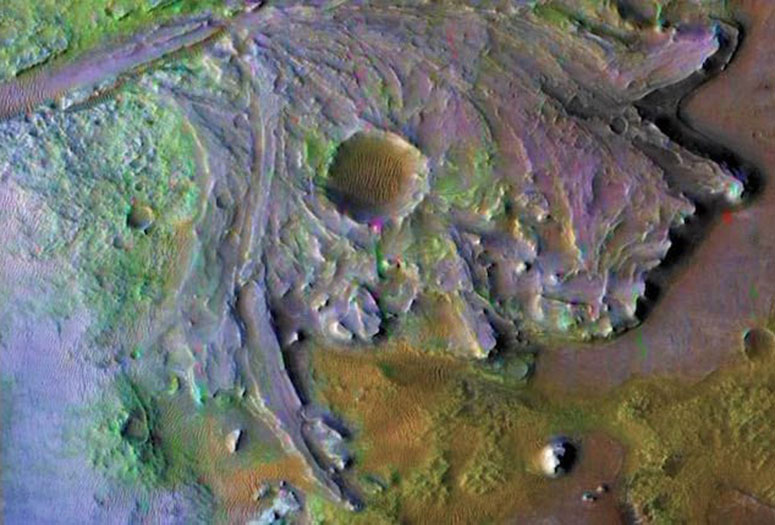 That ship is in space, carrying a rover called Perseverance to Mars. And Siebach, a Martian geologist at Rice University, is now one of 13 scientists recently selected by NASA to help operate the rover and scout for samples that will eventually be returned to Earth.

The rover, launched in July and landing next February, is the first of three missions that will relay pieces of the Red Planet back home. Perseverance will identify, analyze and then collect samples that scientists hope contain signs of ancient microbial life.

A second mission led by the European Space Agency will pick up the collected promising samples and launch them to Mars orbit. A third mission will dock with the orbiter, take the samples and bring them to Earth, likely in the early 2030s.

Siebach, an assistant professor of Earth, Environmental and Planetary Sciences, will be a main player in the first mission, helping direct Perseverance as it stops along an appointed path to look for interesting features and select the precious samples. Her proposal was one of 119 submitted to NASA for funding.

“Everybody selected to be on the team is expected to put some time into general operations as well as accomplishing their own research,” she said. “My co-investigators here at Rice and I will do research to understand the origin of the rocks Perseverance observes, and I will also participate in operating the rover.”

That duty, not unfamiliar to her as a member of the Curiosity rover team, will help her choose Mars rock and sand targets for analysis by Rice data scientist Yueyang Jiang, an expert in machine-learning algorithms, and research scientist Gelu Costin, a mineralogist.

“Because there is only one rover, the whole team at NASA has to agree about what to look at, or analyze, or where to drive on any given day,” Siebach said. “None of the rovers’ actions are unilateral decisions. But it is a privilege to be part of the discussion and to get to argue for observations of rocks that will be important to our understanding of Mars for decades.”

The landing site, the 28-mile-wide Jezero Crater, was selected for its history; it once hosted a lake and river delta where microbial life may have thrived over 3 billion years ago. Siebach is particularly excited to investigate carbonates, the products of atmospheric carbon dioxide dissolved in water that on Earth usually settle into the landscape as limestone. They often contain fossils.

“There are huge packages of limestone all over Earth, but for some reason it’s extremely rare on Mars,” she said. “This particular landing site includes one of the few orbital detections of carbonate and it appears to have a couple of different units including carbonates within this lake deposit. The carbonates will be a highlight of we’re looking for, but we’re interested in basically all types of minerals.”

The primary instrument the Rice team will be using on Perseverance is PIXL, short for Planetary Instrument for X-ray Lithochemistry, which is designed to identify chemical elements while also providing closeups of soil and rocks with a resolution about the size of a grain of salt.

Siebach, Liang and Costin plan to develop computational and machine-learning methods that produce mineral maps of samples based on their high-resolution chemistry. They also aim to establish a context for samples that will eventually come back to Earth and could reveal the signatures of historic life on Mars.

It will take a couple months after landing to validate Perseverance before Siebach and the others get to start their scientific inquiry. Then the long game begins.

“Occasionally, something hits Mars hard enough to knock a meteorite out, and it lands on Earth,” she said. “We have a few of those. But we’ve never been able to select where a sample came from and to understand its geologic context. So these samples will be revolutionary.” 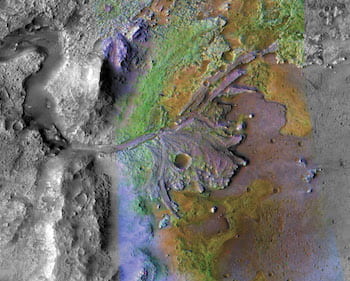 A colorized image of Jezero Crater, the target for NASA’s Perseverance rover. Kirsten Siebach, a Martian geologist at Rice University, is one of 13 scientists selected to help operate the rover. (Credit: NASA/JPL-Caltech/MSSS/JHU-APL)

An illustration shows the rover Perseverance, now on its way to Mars, and its PIXL instrument in operation. Kirsten Siebach, a Martian geologist at Rice University, is one of 13 scientists selected to help operate the rover. (Credit: NASA/JPL-Caltech) 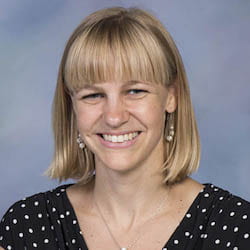