Rice learns from its history in weekly podcast from Task Force on Slavery, Segregation and Racial Injustice 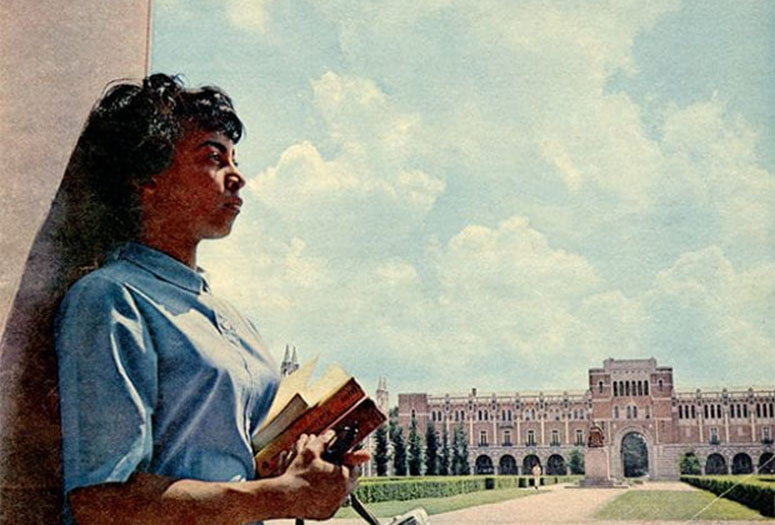 A new podcast from Rice’s Task Force on Slavery, Segregation and Racial Injustice is illuminating the behind-the-scenes work of historians such as Alex Byrd ’90 and Caleb McDaniel — as well as the research done for the Task Force by Rice students.

The two history professors are not only co-chairs of the Task Force steering committee, they’re also the hosts of “Doc Talks,” a weekly webinar and podcast spotlighting the ongoing research being performed by the Task Force, formed in June 2019 to discover, document and disseminate Rice’s past with respect to slavery, segregation and racial injustice.

Each Friday at noon during the fall semester, Byrd and McDaniel convened via Zoom to discuss documents — “Doc Talks” refers to both the presenters and what they present — found in the course of research done, for example, by students in courses like McDaniel’s concurrent “Rice, Slavery and Segregation” or the work done by a team of undergraduates and doctoral candidates in the Racial Geography Project.

The course, the project, the weekly webinars and the podcast are just a few of many ongoing efforts by the Task Force to involve the entire Rice community in its discoveries. There are also the webinars, for instance, hosted this semester on such topics as the Black student experience at Rice and the legal battle over desegregating the university.

Documents examined each week include everything from the iconic photograph of Jacqueline McCauley, the first Black female undergrad at Rice, to a letter from Houston philanthropist Joseph Cullinan withdrawing his financial support from Rice over concerns about the presence of the Ku Klux Klan on campus.

A student research showcase episode brought together current undergraduates and alumni to discuss a touching application essay written in gorgeous cursive by Rice’s first Black female graduate, Linda Faye Williams. They also talked about discovering a $1,450 transaction for “Negro property” in one of William Marsh Rice’s 1859 business ledgers. The latter was buried under 787 pages of other business recordings in that year alone, typifying the sort intense sifting historians must do to find valuable nuggets amid the silt.

“We wanted from the beginning to release the Doc Talks as podcast episodes, because we realized that not everyone would be able to attend the live recordings,” McDaniel said. “The documents we've been discussing are important and we wanted to share them with a wider audience.”

The weekly presentations also offer different means of demonstrating the work historians do to a larger audience, Byrd said.

“First, the webinars represent how conversation with colleagues is part and parcel of the research process: Describing, explaining, and gingerly analyzing what one thinks with a colleague is a way of figuring out what one actually does think. It is an important discipline. A kind of peer review,” Byrd said.

“Secondly, we’re also doing with each other what we do in the classroom. We’re teaching each other too.”

The podcast version of “Doc Talks” could simply offer audio from the weekly webinars, but Byrd and McDaniel instead continue that pedagogical process by providing an even deeper dive into questions raised by the week’s research topic, recording an addendum to each episode alongside producer Kate Coley ’11, who often raises questions of her own.

There is a familiarity and warmth between the three — Coley, Rice’s associate director of alumni relations, also hosts the popular alumni podcast “Beyond the Hedges” and engages Rice professors with the enthusiasm and institutional knowledge of a proud Owl. The interplay makes the podcasts eminently listenable, especially when listeners look at documents posted on the podcast’s website.

“It has been super exciting as an alum to be asked to be part of this podcast,” said Coley, who’s also active with the Association of Rice Alumni’s Diversity, Equity, Inclusion and Social Justice committee. “And it’s because of Alex and Caleb, honestly — they’re the warmest human beings and the work they're doing is just exciting. It’s a watershed moment for Rice.”

The final webinar of the fall semester was recorded Dec. 4, while podcast versions of each are produced on an ongoing basis. They’re posted to the Task Force’s website (along with the supporting documents discussed in that week’s webinar) as well as platforms like Spotify and iTunes.

“Doc Talks” will continue into the spring semester, providing even more fodder for the podcasts and more occasions for students and professors alike to present their research.

“These talks are an opportunity to inform the Rice community about the work of the Task Force, but they are also a chance to show our audience how historians work, how we approach documents, what kinds of questions we wrestle with in our discipline,” McDaniel said. “The work of the Task Force is premised on the understanding that history matters to the present and the future of Rice, and that's true of the world beyond Rice as well.”

Listen to “Doc Talks” and learn more at https://taskforce.rice.edu/doctalks/podcasts.