HOUSTON – (April 1, 2020) – Rice University will receive $3 million for its direct work on the next round of upgrades to the Large Hadron Collider (LHC), but it will be responsible for much more.

Rice physicist Karl Ecklund will oversee roughly half of the $77 million in National Science Foundation funding to U.S. institutions that will help make the particle accelerator, which is best known for finding the Higgs boson, better able to discover even deeper truths about elemental matter.

Ecklund and his Rice colleagues have long been involved in the Compact Muon Solenoid (CMS), one of two major experiments attached to the LHC, a 17-mile ring buried beneath land that borders France and Switzerland.

CMS detects the speed and paths of particles that spew from colliding protons and survive for fractions of a second. The detectors record and transmit the data that scientists later parse for evidence of unique or unknown particles that could provide new knowledge about the universe.

CMS is only compact compared to the collider itself; the sensor-laden array of concentric tubes weighs 13,000 tons and disassembling it for upgrades is an arduous task. That’s why the LHC periodically shuts down for a few years at a time.

“The collisions are surrounded by detectors, nested like Russian dolls,” said Ecklund, who is coordinating upgrades to CMS’s inner tracker and its innermost component, the pixel detector. “There’s shell after shell of detectors. The electronics buried in there are not exactly like camera sensors, but they’re pretty close.

“We’re building what amounts to a data center inside the detector,” he said, explaining that each of the 4,352 sensors, about the size of two matchboxes, that make up the detector amounts to a 2 gigapixel camera -- with about 2 billion pixels -- that takes 40 million frames a second. Rice is responsible for the fiber optic interface that gathers and delivers that data to storage units about 100 meters away.

Design, construction and testing of new components bound for both the inner and outer CMS sensors has already begun, said Ecklund. The inner sensors are being upgraded to relay 10 times the amount of data transmitted by current versions.

That should keep up with the collider itself. The LHC, operated by the European Organization for Nuclear Research (CERN), is currently shut down for upgrades in preparation for the third run of experiments scheduled to start in May, 2021. The new funding is for Run 4 in 2027, the first for the more powerful High-Luminosity LHC.

Ecklund and his team are not the only Rice scientists working on CMS upgrades. Physicist Paul Padley is contributing to the design and construction of the outer ring of sensors. “What we’re doing for the GEMs (the gas electron multipliers) is very similar to what Karl is doing for the pixels,” Padley said. “We’re building the electronics interface for those signals.”

The GEMs are the last stop for particles exiting the LHC core, but the most likely to detect heavy, weakly interacting muons.

Rice research scientists Mikhail Matveev and Ted Nussbaum are managing the design and construction of the next-generation components, while students from San Jacinto College, led by Rice adjunct professor Laria Redjimi, are working at CERN on the endcap muon system in preparation for Run 3. 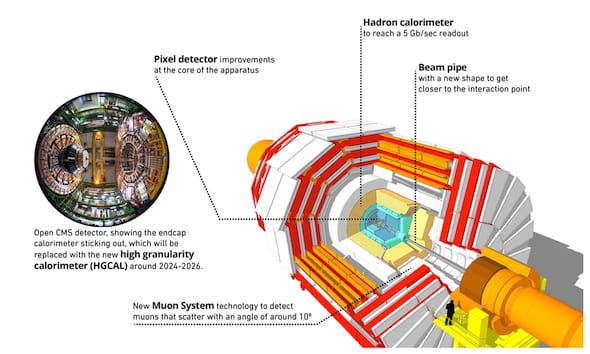 Padley said the Rice team expects to work at CERN and with data gathered by the collider for years to come. “The plan is to run the LHC late into the 2030s,” he said. We know we’ll be doing interesting physics for at least the next 20 years, based on the data we get. Even if it turns off in 2038, we’ll still have data to analyze.

“The LHC was funded to discover the Higgs boson, but the point was really to make lots of Higgs bosons and use them as a tool for discovery,” he said.

“We think of the Higgs as a portal, a way to get to physics beyond the standard model,” Ecklund said.

What’s in store for the CMS detector over the next two years?: https://home.cern/news/news/experiments/whats-store-cms-detector-over-next-two-years Rice University physicists and engineers have received National Science Foundation support to design, build and manage the installation of next-generation sensors in the Compact Muon Solenoid at the Large Hadron Collider. (Credit: CERN) A graphic look at the Compact Muon Solenoid (CMS), part of the Large Hadron Collider. CMS detects the speed and paths of particles emitted by colliding protons. The detectors record and transmit the data that scientists later parse for evidence of unique or unknown particles that could provide new knowledge about the universe. (Credit: CERN)