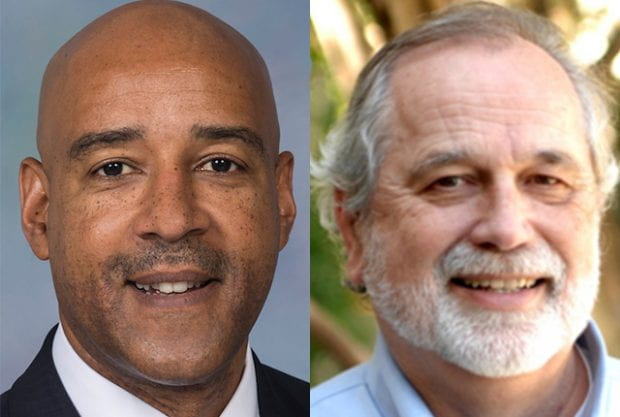 HOUSTON – (Feb. 7, 2020) – Reginald DesRoches, the William and Stephanie Sick Dean of Engineering, and Gene Frantz, a professor in the practice of electrical and computer engineering, both at Rice University’s Brown School of Engineering, have been named to the National Academy of Engineers.

DesRoches, who will become Rice provost in July, and Frantz are among 87 inductees in this year’s class, along with 18 new international members.

According to the academy, the prestigious appointment honors those who have made outstanding contributions to engineering research, practice or education.

Selection of academy members is the culmination of a yearlong process. The ballot is set in December and the final vote for membership occurs during January. New members will be formally inducted at the academy’s annual meeting in Washington, D.C., on Oct. 4.

DesRoches, a civil engineer by training, was named for his research and design of resilient infrastructure systems to mitigate damage from natural disasters such as earthquakes and other extreme conditions. He became dean at Rice in July 2017 after serving as chair of the School of Civil and Environmental Engineering at the Georgia Institute of Technology.

“I am truly honored by this recognition,” DesRoches said. “This would not have been possible without the incredibly dedicated students and postdocs that I have worked with over the past two decades, as well as the many outstanding colleagues, collaborators and mentors that I have had. I share this honor with them.”

Frantz was elected for leadership in the development and commercialization of digital signal microprocessors.

He was a member of the team that designed TI's first speech synthesis chip, the TMS5100, in the mid-1970s. At the time, many were skeptical that DSP technology could be implemented on an integrated circuit. The chip was used in TI's Speak & Spell, one of the earliest handheld electronic devices and the first educational toy to utilize speech that was not recorded on a tape or phonograph.

Two others with strong Rice connections named to the academy are Sallie Keller and Jorge Nocedal.

Keller is former dean of the Brown School of Engineering and now division director, social and decision analytics division and professor of public health sciences at the Biocomplexity Institute and Initiative, University of Virginia, Charlottesville. She was a professor of statistics and dean of engineering at Rice from 2005 to 2010.

Keller was elected for the development and application of engineering and statistical techniques in support of national security and industry.

Nocedal, the Walter P. Murphy Professor of Industrial Engineering and Management Sciences at Northwestern University, earned his Ph.D. at Rice in 1978 under the supervision of fellow academy member Richard Tapia. He was elected for his contributions to the theory, design and implementation of optimization algorithms and machine learning software.