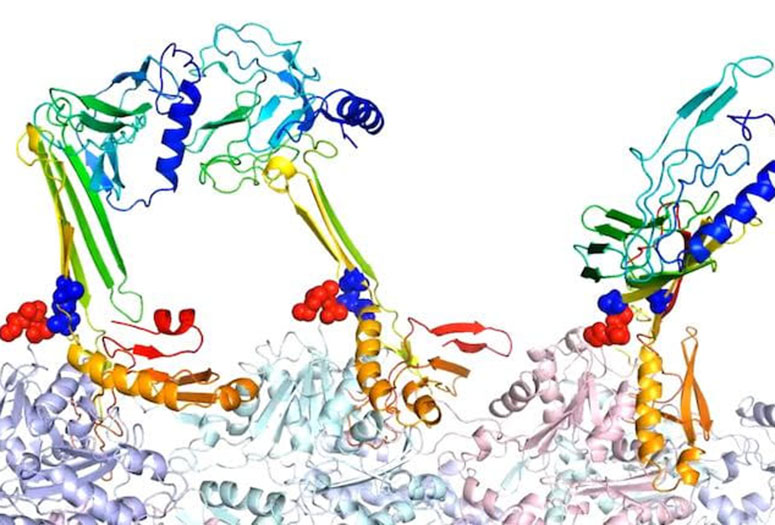 A chameleonlike protein in neurons can change its mind, and in the process change our brains.

Scientists at Rice University and the University of Texas Health Science Center at Houston (UTHealth) uncovered new clues in the protein CPEB3 as part of their dogged pursuit of the mechanism that allows humans to have long-term memories.

Researchers at Rice University modeled the binding structures of actin and associated proteins they believe are responsible for the formation of longterm memory. Here, the beta hairpin form of zipper sequence is a potential core for the formation of intramolecular beta sheets. In the predicted complex structure of F-actin and three PRD+ABD constructs shown above, the three PDB+ABD constructs are shown in rainbow color, from blue to red, from N-terminal to C terminal. The surfaces of first 4 negative residues of actin mono-mers are colored in red and the surfaces of the two positive ends of the zipper sequence is colored in blue. (Credit: Center for Theoretical Biological Physics/Rice University)

The study by Rice theoretical biophysicist Peter Wolynes and Neal Waxham, a neurobiologist at UTHealth’s McGovern Medical School, provides insight into a positive feedback loop between forming the actin backbones that give dendritic spines their shape and flexibility and the actin-binding domains in CPEB3, a functional prion that binds RNA which also forms long-lived aggregates that may indeed store the stuff that memories are made of.

Protein-folding models by Wolynes and his group at Rice’s Center for Theoretical Biological Physics (CTBP) and experiments at UTHealth turned up previously unknown structural details for CPEB3 and how it binds to actin, as reported in the Proceedings of the National Academy of Sciences paper.

In the process, they also examined the key role played by a protein known as SUMO, a regulator that attaches to and detaches from other proteins in cells to modify their functions. The researchers suspect it helps to regulate when and how CPEB3’s chameleonlike ends (the N-terminus and C-terminus) bind to either SUMO or the flexible, filamentous actin (f-actin) spines in dendritic spikes.

CPEB3 proteins are soluble when attached to SUMO, which also buries their actin-binding sites. But during synaptic activity, they can be “deSUMOylated” and become available to bind with the hydrophobic binding pockets along f-actin filaments.

The models show that when attracted to actin, CPEB3 transitions from a coiled coil of helices into a beta sheet structure that “zips” into a hairpin configuration that allows it to aggregate with other CPEB3 proteins.

Upon aggregation, CPEB3 appears to translate its target messenger RNAs, which include actin mRNA that strengthens the synaptic junctions essential to memory, completing the positive loop.

“This is a more ambitious project than the actin-CaM kinase study, where we also simulated a really huge actin system with a really huge protein,” Wolynes said. In that study, published a year ago, CTBP researchers modeled how a central protein (CaMKII) holds parallel actin filaments together, a state that could be visualized in an electron microscope by Waxham’s lab.

Now the researchers are defining the structural details that allow CPEB3 to bind to either actin or SUMO, but not both. “One of the main aspects of this paper is to reconcile those two quite different parts of the story,” he said. “We think the CPEB terminals are chameleonlike because they let the molecule choose whether it will interact with the SUMO or with the actin.

“We’re not to the end of the story yet,” Wolynes said. “But the latest results put us in a reasonable place to say more about the mechanism.”

Rice graduate student Xinyu Gu is lead author of the paper. Co-authors of the paper are Rice alumni Nicholas Schafer of Schafer Science and Mingchen Chen, Rice academic visitor Qian Wang and UT Health medical student Sarah Song. Wolynes is Rice’s D.R. Bullard-Welch Foundation Professor of Science and a professor of chemistry, of biochemistry and cell biology, of physics and astronomy and of materials science and nanoengineering and co-director of the CTBP. Waxham is the William M. Wheless III, Professor in Biomedical Sciences and a professor of neurobiology and anatomy at UTHealth, and a member of the faculty of the University of Texas MD Anderson Cancer Center UTHealth Graduate School of Biomedical Sciences.

The National Science Foundation, through its support of the CTBP and a RAISE grant, funded the research.

An annealing simulation created at Rice shows F-actin attracts the 2 ends of zipper sequence to facilitate the formation of the beta hairpin form. The surface of the 4 negative-charged residues in actin is shown in red. The surface of the positive-charged residues at the 2 ends of the zipper sequence is shown in blue. (Credit: Center for Theoretical Biological Physics/Rice University)