At our cores, we’re all strengthened by ‘dumbbells’ 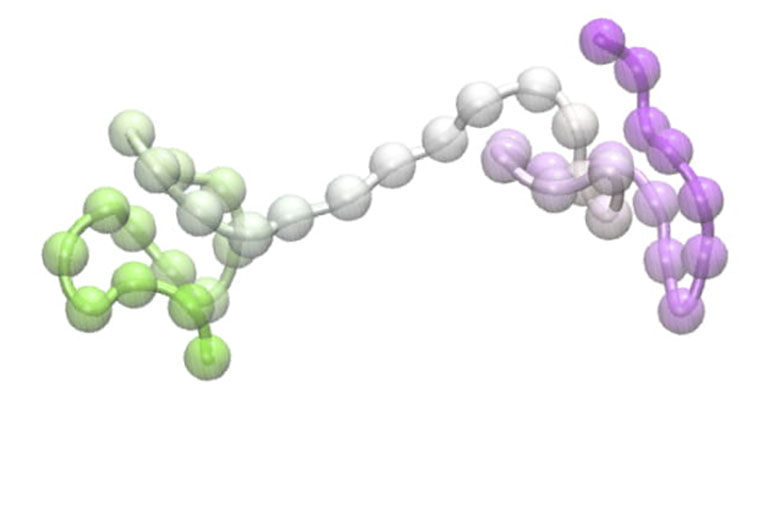 Rice University scientists on a long quest to study the structure and function of chromosomes have found that amid the apparent chaotic state of DNA during interphase, when cells are between divisions, there are pockets of order in the configuration of certain gene-containing regions.

These structures, reported in an open-access eLife study, offer a window into how chromosomes function and promise new avenues of research for those digging into their secrets.

“In molecular biology and gene expression, people talk about transcription factors and inhibitors and enhancers, but it seems there is no structural information,” Onuchic said. “With advances in looking at chromatin structures, it starts to become possible to know how these structures and chromatin dynamics control gene expression.

“This paper suggests, for the first time, a mechanism connecting genome structure and gene expression,” he said.

The researchers lay out four results from their coarse-grained Minimal Chromatin Model (MiChroM), a technique drawn from 20 years of experience with their energy landscape theory for predicting the structure of proteins.

First, they used MiChroM to predict chromosome structural ensembles for different cell types using the associated epigenetic markers as the sole input, finding the predictions to be consistent with experimental observations.

In previous research, they used MiChroM to simulate individual chromosomes in lymphoblastoid cells. The new work implies that the principles they discovered in that work also apply generally to different human cell types, highlighting the transferability of their theoretical model.

Second, with data from experiments using 3D tracing, which helps to directly visualize the tangle of DNA in a cell’s nucleus during interphase, they determined the structures of chromosomes are all different. Yet they also found distinct clusters with what appear to be common structures, genes that have flexible, dumbbell-like globular domains at the head and the tail.

Cheng said their analysis of the experimental images revealed three distinct clusters among the disorder. “We believe that one is an artifact, but in the other two, the structures are either closed, meaning the two globular domains at the head and the tail are more or less touching, or open, where the domains have come apart,” he said. This same structural transition appeared in the group’s simulations using MiChroM.

Third, the researchers found that genes contained in this dumbbell structure are all located within the string that links the globular ends. “The fact that we find these structures undergo an open-close transition plausibly suggests it's related to transcriptional regulation,” Cheng said. “This is suggestive of a direct relationship between the structure and functional aspects of gene expression.”

Finally, the section of chromosome 21 detailed via experiments and modeled at Rice showed the position of the “dumbbells” is dynamic, with “A-type” structures moving to the surface of the disordered chromosome when they are functionally active, while inactive or “B-type” structures tend to move to the interior.

“Maybe genes that have to be expressed, for example in early development, are activated and then move to the core of the chromosome because they’re not used again,” he said. “But that remains to be proven. We have just started to show evidence in that regard.”

“No one should be under the illusion that a program of research by five or six scientists can by itself ultimately answer all the questions about gene regulation,” said co-author Peter Wolynes, co-director of the CTBP. “The same was true when we began to study protein folding. What was necessary there was to get to create new ways of thinking about the problem and make predictions that inspired experimentalists.

“In the same way, we now have to educate experimentalists in this new way of thinking about how chromosomes act,” he said.

Co-authors of the paper are former CTBP postdoctoral fellow Vinicius Contessoto of the Brazilian Biorenewables National Laboratory; Erez Lieberman Aiden of the Center for Genome Architecture at Baylor College of Medicine and a CTBP senior scientist; and former CTBP postdoctoral fellow and current senior scientist Michele Di Pierro, an assistant professor of physics at Northeastern University. Wolynes is the D.R. Bullard-Welch Foundation Professor of Science and a professor of chemistry, of biosciences and of physics and astronomy. Onuchic is the Harry C. and Olga K. Wiess Professor of Physics and Astronomy and a professor of chemistry and of biosciences.

The National Science Foundation and the Welch Foundation supported the research.

Read the paper at https://elifesciences.org/articles/60312.