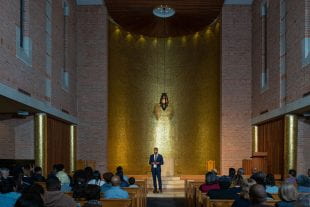 HOUSTON – (Feb. 13, 2020) – Houston wrestling history, once lost to time, will be resurrected in all its flamboyant glory in a photo and film retrospective at Rice University.

The Rice Media Center celebrates its 50th anniversary with an exhibition of longtime Rice professor Geoff Winningham’s 1970-71 photographs celebrating professional wrestling in the Houston Coliseum. The show will open with a reception Feb. 22 from 6-8 p.m. and will remain on view at the Rice Media Center through March 20.

The retrospective features over 200 contemporary and historical photographs, as well as video clips from Winningham’s rarely seen 16 mm black-and-white film of the wrestling scene in Houston in the early 1970s. The exhibit is timed to coincide with the publication of a new edition of his acclaimed 1971 book, “Friday Night in the Coliseum.”

This exhibition is the first showing of Winningham’s photographs in nearly 50 years.

“Friday Night in the Coliseum” was critically acclaimed almost immediately upon its 1971 release. The New York Times, the Village Voice, the Boston Globe and Newsweek published glowing reviews, while a 1972 issue of Life magazine devoted three pages to photographs from the book, heralding it as “The Rousin’ Rebirth of Rasslin.”

Winningham was awarded a 1972 John Simon Guggenheim Fellowship to continue his photography, as well as a grant from the Public Broadcasting Corporation to produce a 16 mm film on professional wrestling in Houston.

In 1973, the American Federation of Arts published “Masters of the Camera,” a collection of American photography of the 20th century that concluded with six photographs from “Friday Night in the Coliseum.”

Winningham’s vision of professional wrestling as folk theater was hardly the first. The French philosopher and semiologist Roland Barthes celebrated wrestling as “a spectacle of excess,” finding in it “a grandiloquence which must have been that of ancient theatres.

If there was a rebirth of locally promoted professional wrestling, as Winningham photographed it in 1971, it was short-lived.

“I suppose that I should not be shocked that the kind of wrestling that I witnessed five decades ago has disappeared,” Winningham writes in the afterword to his book’s new edition. “In time, all things change. Still, as I prepare the second edition of this book, as I look again at the pictures that I took and read the words of the people that I remember from my Friday nights in the Coliseum, I am saddened by what has been lost, and I am grateful for what I have been able to preserve.”

A full lineup of events for the Rice Media Center’s 50th anniversary celebration can be found at vada.rice.edu/50th-anniversary.

For a Rice University map and parking information, visit parking.rice.edu.

Located on a 300-acre forested campus in Houston, Rice University is consistently ranked among the nation’s top 20 universities by U.S. News & World Report. Rice has highly respected schools of Architecture, Business, Continuing Studies, Engineering, Humanities, Music, Natural Sciences and Social Sciences and is home to the Baker Institute for Public Policy. With 3,970 undergraduates and 2,934 graduate students, Rice’s undergraduate student-to-faculty ratio is just under 6-to-1. Its residential college system builds close-knit communities and lifelong friendships, just one reason why Rice is ranked No. 1 for quality of life and for lots of race/class interaction and No. 4 for happiest students by the Princeton Review. Rice is also rated as a best value among private universities by Kiplinger’s Personal Finance.