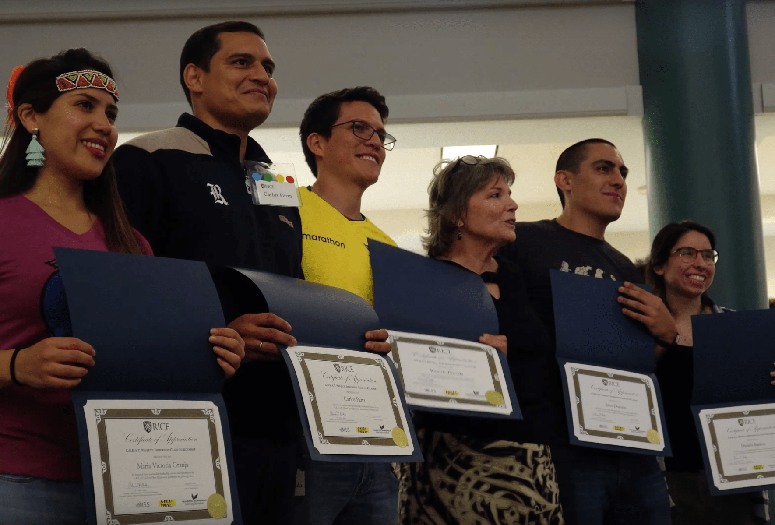 A group of young adults was absorbing new words in Quechua, an Incan language native to Ecuador, in one corner of a spacious, sunny room in Herring Hall. In another corner, a different group practiced math using small beads that, after each set of problems, were strung together to create colorful Ecuadorian jewelry. Across different areas of the room, others sat captivated, learning about fluid mechanics and biodiversity in the Galápagos Islands.

Each of the instructors in the class was a Rice international grad student, teaching about their country’s culture while interacting with a cohort of enthusiastic young adults with intellectual or developmental disabilities (IDD).

And at the end of a day filled with various learning activities, spread among multiple stations in Rice’s Center for Teaching Excellence, the students were treated to a surprise: dance performances and impromptu lessons by an Ecuadorian ballet folklorico troupe.

This was the latest class in the Global Rice Empowers Academics and Training (GREAT) Project, an outreach initiative of the Office of International Students and Scholars (OISS) that seeks to support the university’s Vision for the Second Century, Second Decade (V2C2) by engaging Houston in meaningful ways.

The GREAT Project provides informal academic and cultural opportunities to young adults with IDD while offering international students and scholars a chance to teach about their country as the backdrop of other things they’re learning and researching at Rice.

“They’re all very much the same age, so there’s a type of peer teaching,” said Adria Baker, executive director of the OISS and associate vice provost for international education, of the project. “The name just fits what it is.”

Grad students from Ecuador primarily taught this class, which was the third so far in the GREAT Project series.

Carlos Parra hails from Guayaquil, Ecuador, one of Houston’s sister cities. He headed up the group of Ecuadorian grad students leading this year’s project. Members of the Houston Guayaquil Sister City Association showed up too, bringing along food, wooden flutes and colorful woven shawls for the young adults to take home as souvenirs.

“This is not just Ecuador teaching a class, though,” said Parra, a Ph.D. student in materials science and nanoengineering. “It’s a whole group of international students from Rice working together.”

Xinyu Xu, also a Ph.D. student in materials science and nanoengineering and the president of the Rice Chinese Students and Scholars Association, took the lead on a Chinese class later that year, and the project began to snowball.

Both the Brazilian and Chinese classes boasted food, music and fun, but most importantly they taught the young adults basic science, math, social science and language skills through activities prepared for them by the graduate students and supported by dozens of other international grad student volunteers.

Now, with a third successful class in the books — this one filled with many returning students, who greeted the Ecuadorian curriculum with glee — plans are in the works for a fourth GREAT Project class next semester.

“Not being from here, I just enjoy so much getting to know other countries,” said de Freitas Magalhães, who assisted with the Ecuadorian and Chinese classes after having laid the groundwork with her Brazilian course last year. “This is my favorite part of being here.”

The GREAT Project series will feature another country or region for its next class, once again spearheaded by the active international student community at Rice, meaning it promises to be equally entertaining and educational in its offerings.

“This is a great professional development opportunity for our Rice graduate students,” Baker said. But just as important, she said, are the cultural connections that are formed each time.

“We live in a very global society now and learning about other countries is essential,” Baker said.

For short videos on the Brazilian, Chinese and Ecuadorian GREAT classes, visit greatproject.blogs.rice.edu.