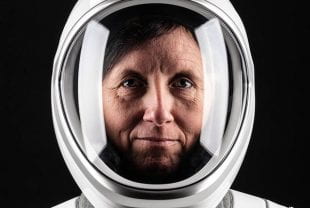 Walker, who spent six months aboard the space station in 2010, is the first native Houstonian astronaut and the only NASA astronaut to earn three degrees from Rice. In a video interview with her alma mater this summer, she discussed Rice, her long road to being selected as an astronaut and the thrill of riding a rocket into space.

"When you get really close to a launch, it's like the rocket comes alive," she said. "When they're starting to open the valves to move the fuel where it needs to go, you can hear that, and you can feel that. When the engines finally light, the vibration and the noise that you experience is just unbelievably fantastic."

Walker co-piloted a Soyuz spacecraft on her 2010 launch. She and her Crew-1 teammates Mike Hopkins, Victor Glover and Soichi Noguchi are set to become the first operational crew delivered to the space station aboard a commercial spacecraft. The sleek interior of their Crew Dragon capsule was on display during the spacecraft's first crewed test flight in May.

Walker said the advent of commercial space makes it a very exciting time to be an astronaut.

"I feel like the science fiction movies are starting to come to life," she said. "Getting the commercial crew companies on board, with SpaceX and what Boeing's doing, is just going to change everything."

Because Walker and her crewmates are flying a new Dragon Crew capsule into space, they got to name their ship before its maiden voyage. In recognition of the global pandemic and other hardships of 2020, they chose "Resilience."