In a hurry to develop drugs? Here’s your cHAT 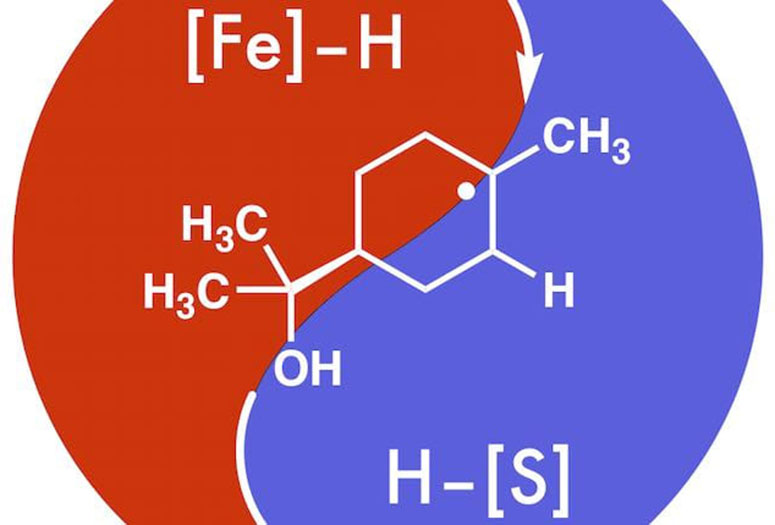 Rice University scientists have developed a method to reduce alkenes, molecules used to simplify synthesis, to more useful intermediates for drugs and other compounds via a dual-catalyst technique known as cooperative hydrogen atom transfer, or cHAT.

The process enables the hydrogenation of alkenes, hydrocarbons that contain a carbon-carbon double bond, in a simpler and more environmentally friendly way.

The work by Rice chemist Julian West and postdoctoral researcher Padmanabha Kattamuri is detailed in the Journal of the American Chemical Society.

In each step, a catalyst contributes a single electron and a proton. The cHAT twist is that both reactions happen in one synergistic process, the second catalyst taking over as soon as the first is done.

“The fundamental reaction of hydrogenation is super useful for making molecules,” said West, who joined Rice last year with funding from the Cancer Prevention and Research Institute of Texas (CPRIT). “There are a few elements that are really good at this, and can do a lot of different transformations, but they’re very expensive and not the most sustainable.”

Because cHAT employs Earth-abundant iron and sulfur as catalysts, it costs far less than industry-standard methods that rely on expensive noble metals like platinum, palladium, gold and silver, as well as hydrogen gas and oxidizing reagents that create toxic waste.

The goal is to make hydrogen atoms more available to react with other molecules of choice to form new compounds. The cHAT process employs no added oxidants, works with a variety of substrates and is highly scalable. The dual-catalyst approach also serves to produce hydrogenation diastereomers, or a different form of the same product molecule that can’t be made with noble metals.

West used a baseball analogy to describe cHAT. “If you remember 'Moneyball,' you know that instead of trying to hire one superstar who can do everything but is really expensive, it’s better to get a few bit players and have them work together to achieve a similar transformation,” he said.

“Furthermore, through teamwork, we introduced a strategy to get us to new variations of our products as well,” West said. “By combining dirt-cheap iron with an organic sulfur compound, we were able to cobble together a nice win-win. The iron catalyst tees up the process by giving it one hydrogen atom, and gets out of the way. Then the sulfur can come in and give it the second one.”

He noted flammable hydrogen gas is a common reagent in industrial hydrogenation. “Our process uses this simple, bench-stable reagent, phenylsilane, as a hydrogen source,” West said. “We just add it to ethanol with both catalysts and the alkene. And ethanol is a green solvent as well.

“And when you’re making drugs on the ton scale you want to avoid generating tons of toxic solvent waste,” he said. “That’s something to avoid at all costs. So this could be a big win for pharmaceutical companies.”

He said his lab is working to configure its catalysts to produce a variety of products. “That would give us a lot of chemical complexity and diversity from a single starting material,” West said. “We want to know if we can exert this high level of control over the process.”

West is a CPRIT Scholar, the Norman Hackerman-Welch Young Investigator and an assistant professor of chemistry. CPRIT and Rice supported the research.

Rice scientists simplify the incorporation of nitrogen into molecules: https://news.rice.edu/2017/07/12/rice-scientists-simplify-the-incorporation-of-nitrogen-into-molecules-2/