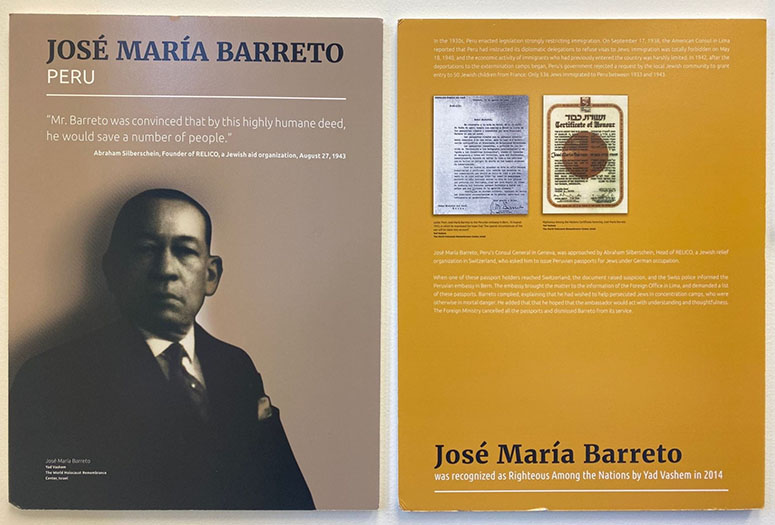 Since 1963, over 27,000 men and women from 51 countries have been recognized with the honorary title Righteous Among the Nations for going above and beyond to help rescue Jews during the Holocaust, an honor designated by the World Holocaust Remembrance Center Yad Vashem, located in Jerusalem.

The stories of 15 of those people, all of them diplomats, are highlighted in a new exhibition mounted in the lobby of Rayzor Hall throughout the spring semester, “Beyond Duty: Diplomats Recognized as Righteous Among the Nations,” sponsored by Rice’s Program in Jewish Studies.

Many of the diplomats were successful in their efforts, such as Chiune Sugihara, the vice consul at the Japanese embassy in Lithuania who saved over 3,000 Jews by issuing transit visas in direct defiance of the Japanese government. Others, such as José María Barreto, the consul general of Peru in Switzerland, were not so lucky: He was immediately dismissed from service when his plan to issue Peruvian passports to Jews was discovered.

Yet both Sugihara and Barreto were ultimately recognized as Righteous Among the Nations for risking everything in a rebellious attempt to save fellow humans from Nazi concentration camps and certain death.

The 28 panels comprising the exhibition are part of a larger program commemorating International Holocaust Remembrance Day, which falls this year on Jan. 27, the 75th anniversary of the liberation of Auschwitz-Birkenau — the largest Nazi concentration camp — and the symbolic end of the Holocaust.

“Beyond Duty” was originally created by the Israel Ministry of Foreign Affairs and has been shown at Texas A&M University and the University of Houston, but its exhibition at Rice marks the first time additional programming has been developed around its stories.

In addition to the semesterlong exhibition, the Program in Jewish Studies partnered with the Consul General of Israel to the Southwest to convene a panel discussion Jan. 27 at Holocaust Museum Houston featuring the consul generals of Israel, Germany and Japan, followed by a one-woman performance of “Whistle,” which deals with the trauma of second-generation Holocaust survivors.

Both the panel and the play quickly sold out.

“Because we always like to try to connect our on-campus programming with the community, I suggested organizing an event of some kind at a community venue that would be linked to the exhibition,” said Melissa Weininger, the Anna Smith Fine Senior Lecturer in Jewish Studies and associate director of the Program in Jewish Studies. “And after brainstorming a bit, we came up with the idea of having a panel discussion at the Holocaust Museum featuring current diplomats who would discuss the issue of diplomatic ethics addressed in the exhibition.”

Weininger collaborated closely with two people at the Israeli consulate in Houston: Jessica Blumfield, the academic affairs officer, and Idan Schwartz, the Israeli cultural attaché, both of whom have worked to find venues for “Beyond Duty” across Texas.

“We are very happy that Rice University chose to show it for a full semester and to create other programming of their own around this topic, because, you know, it's a very interesting story and unfortunately, it's still relevant to our day,” Schwartz said.

According to the United Nations, the world is now witnessing the highest levels of displacement on record: At the end of 2018, 70.8 million people were away from home because of conflict or persecution — including approximately 15 million under the age of 18.

“This is about the moral obligations of people in the international community, because this exhibition features diplomats who didn't follow the policy and procedures of their own countries in order to help Jews during World War II,” Blumfield said. “And it's about the idea of: What do we do when we have power as an individual? How do we use that for the betterment of mankind?”

Schwartz and Blumfield hope members of the Rice community will leave the exhibition contemplating not only the importance of international diplomacy but also their own responsibilities to their fellow humans.

“Each and every one of us as a human being has enough power to stand up and say, ‘I'm not playing the game, and I'm doing the right thing as a human being,’” Schwartz said. “It’s a very important lesson for all of us to understand.”

After a Jan. 22 opening reception for the “Beyond Duty” exhibition, which was co-sponsored by the Baker Institute for Public Policy and the Boniuk Institute for Religious Tolerance and attended by Gilad Katz, the Consul General of Israel to the Southwest, Weininger said she hopes these dramatic stories of humanity at its very best and very worst will inspire students who pass through Rayzor Hall’s lobby each day.

“These stories have significance beyond their particular history,” she said. “We are living in a time of crisis and migration, and the exhibit highlights the role of diplomats and diplomacy in moments of political catastrophe.”

“Part of the mission of the Program in Jewish Studies, and the humanities more broadly, is to teach students to make these kinds of connections between the material they encounter in class and their own lives — to give them tools to reflect critically on what is happening around them," Weininger said. "This exhibit and the event at the Holocaust Museum are great examples of the value of Rice to the community, of the Program in Jewish Studies to Rice, and of the humanities to all of us.”