Groovy key to nanotubes in 2D

Why do carbon nanotubes line up? They're in a groove 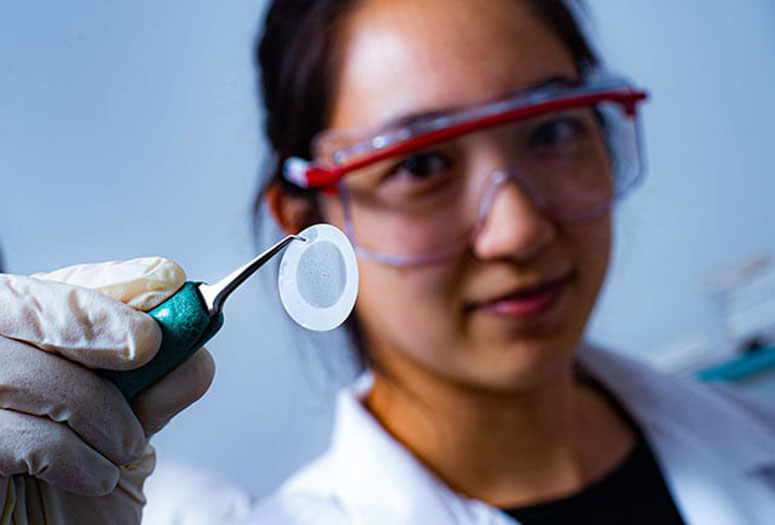 HOUSTON -- (March 9, 2020) -- Ultrathin carbon nanotubes crystals could have wonderous uses, like converting waste heat into electricity with near-perfect efficiency, and Rice University engineers have taken a big step toward that goal.

The latest step continues a story that began in 2013, when Rice's Junichiro Kono and his students discovered a breakthrough method for making carbon nanotubes line up in thin films on a filter membrane.

Nanotubes are long, hollow and notoriously tangle-prone. Imagine a garden hose that's dozens of miles long, then shrink the diameter of the hose to the width of a few atoms.

Anyone who's ever fought with a knotted hose can appreciate Kono's feat: He and his students had turned a mob of unruly nanotubes into a well-ordered collective. Of their own accord, and by the billions, nanotubes were willingly lying down side by side, like dry spaghetti in a box.

The problem? Kono and his students had no idea why it was happening.

"It was magical. I mean, really mysterious," said Kono, an electrical engineer, applied physicist and materials scientist who has studied carbon nanotubes for more than two decades. "We had no idea what was really happening on a microscopic scale. And most importantly, we did not even know in which direction that nanotubes would align."

He and his team published their findings in 2016, and the field weighed in with possible explanations. The answer, as described in a new paper by Kono's team and collaborators in Japan, is both unexpected and simple: Tiny parallel grooves in the filter paper — an artifact of the paper's production process — cause the nanotube alignment. The research is available online in the American Chemical Society journal Nano Letters.

Kono said a graduate student in his lab, study lead author Natsumi Komatsu, was the first to notice the grooves and associate them with nanotube alignment.

"I found that any commercially purchased filter membrane paper used for this technique has these grooves," Komatsu said. "The density of grooves varies from batch to batch. But there are always grooves."

To form the 2D crystalline films, researchers first suspend a mixture of nanotubes in a water-surfactant solution. The soaplike surfactant coats the nanotubes and acts as a detangler. In 2013, Kono's students were using vacuum filtration to draw these mixtures through membrane filter paper. The liquid passed through the paper membrane, leaving a film of aligned nanotubes on top.

In an exhaustive set of experiments, Komatsu and colleagues, including Kono group postdoctoral researcher Saunab Ghosh, showed that the alignment of nanotubes in these films corresponded to parallel, submicroscopic grooves on the paper. The grooves likely form when the filter paper is pulled onto rolls at the factory, Kono said.

Komatsu examined dozens of samples of filter paper and used scanning electron microscopes and atomic force microscopes to characterize grooves and patterns of grooves. She cut filters into pieces, reassembled the pieces with grooves facing different directions and showed they produced films with matching alignments.

Komatsu and colleagues also used heat and pressure to remove the grooves from filter paper, using the same principles involved in ironing wrinkles from clothing. They showed that films made with groove-free paper had nanotubes aligned in several directions. Finally, starting with groove-free paper, they showed they could use a very fine reflective grating with periodic grooves to create their own patterns of grooves and that corresponding nanotube films followed those patterns.

Kono said the method is exciting because it brings a needed level of predictability to the production of 2D crystalline nanotube films.

While Kono group's films are essentially 2D — as much as an inch in diameter but just a few billionths of a meter thick — the individual nanotubes behave like 1D materials, especially in terms of their optical and electronic properties.

The extraordinary optical and electronic properties of carbon nanotubes depend on their diameter and structure, or chirality. Some chiralities act like metals and others like semiconductors, and researchers have struggled for decades to find a way to make large, macroscopic objects like a wire or one of Kono's 1-inch diameter films purely of nanotubes with one diameter and chirality.

"That's obviously the next step," Ghosh said. "In this study, we still used a mixture of metallic and semiconducting carbon nanotubes with a diameter distribution. The next step is to apply this new method based on intentional groove-making using a grating to achieve total control of the alignment direction."

Kono said his team has made highly aligned 2D crystals from solutions with a diverse mixture of nanotubes.

"But when we go to a single-chirality solution, we were never satisfied with the alignment," he said. "Now, with this knowledge of grooves, we are confident we can improve the degree of alignment in the case of single-chirality carbon nanotube films."

Single-chirality films could open the door to applications with mind-boggling potential — for example, sheets of pure carbon that convert heat into light with almost perfect efficiency. Marrying such a sheet to a photovoltaic material could provide a way to turn heat into electric power very efficiently, creating the possibility of radiators that both cool motors and electronics while also powering them.

Kono's lab and the research group of Rice's Gururaj Naik demonstrated the concept for this in a 2019 paper about hyperbolic carbon nanotube films.

Single-chirality crystalline films could also be used to study new states of matter, such as exciton polaritons and Bose-Einstein condensates, and for applications that haven't yet been envisioned, Kono said.

"At this moment, only a small number of groups in the world can make these aligned, highly dense, heavily packed carbon nanotube films," he said. "And the work we just finished, the groove-assisted work, offers more control. This will lead to better films, new applications and new science. We are very excited."

Kono is a professor of electrical and computer engineering, physics and astronomy, and materials science and nanoengineering and the director of Rice's Applied Physics Graduate Program.

https://news-network.rice.edu/news/files/2020/03/0305_GROOVES-fit3118-lg.jpg
CAPTION: Rice University graduate student Natsumi Komatsu was the first to notice that the alignment of 2D carbon nanotube films corresponds to grooves in the filter paper beneath the films. (Photo by Jeff Fitlow/Rice University)

https://news-network.rice.edu/news/files/2020/03/0305_GROOVES-fto-lg.jpg
CAPTION: Rice University researchers found single-walled carbon nanotubes line up side by side in 2D films due to small grooves in the filter paper upon which the films form during vacuum filtration. Films as large as 1 inch in diameter (top left) form atop paper filters that separate nanotubes from liquid surfactant. Rice researchers showed that grooves in the paper (top right) guide nanotubes (bottom) into highly ordered arrangements. (Image courtesy of Kono group/Rice University)

https://news-network.rice.edu/news/files/2020/03/0305_GROOVES-fit3108-lg.jpg
CAPTION: From left to right, Rice University postdoctoral researcher Saunab Ghosh, graduate student Natsumi Komatsu and professor Junichiro Kono and colleagues determined that grooves on filter paper cause nanotubes to align in highly ordered 2D films that were discovered in Kono's lab seven years ago. Finding the cause of the alignment clears the way for the production of higher-quality films that could be used to convert heat to electricity. (Photo by Jeff Fitlow/Rice University)