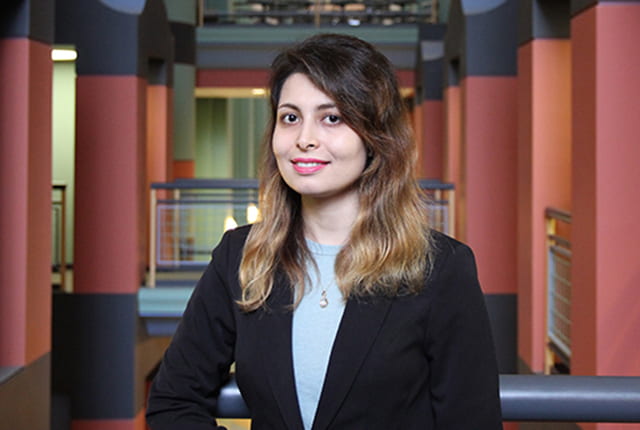 Ghasempour, a postdoctoral research associate in electrical and computer engineering, received her doctorate from Rice in May. The prestigious Marconi Society award recognizes her groundbreaking achievements as a Ph.D. student, including the first published technique for “link discovery” on terahertz frequency networks.

“Yasaman’s research is deep, bold and interdisciplinary, spanning from physics to electrical engineering and computer science,” said Edward Knightly, Rice’s Sheafor-Lindsay Professor of Electrical and Computer Engineering and Ghasempour’s Ph.D. advisor. “While terahertz links had been demonstrated in a few physics labs, there was not yet any way to dynamically connect devices for a true mobile network until now.”

The real-time, high-speed connections that Ghasempour’s innovations enable will be used in many ways. For example, if a child runs into a busy street, a terahertz sensor in the youngster’s backpack could alert the emergency braking system in an oncoming car to avoid a tragic accident. Or a terahertz-connected smartwatch could automatically alert arriving paramedics that a semiconscious man has both dementia and diabetes. Or safety engineers, responding to a gas leak at a factory, could use network-connected drones to pinpoint both the leak and the location of employees wearing network-connected ID badges.

“‘Beyond 5G’ wireless networks of the future could make these scenarios and many others a reality,” said Ghasempour, who will join Princeton University’s faculty as an assistant professor in 2021. “Because we can share the sensor information with ultra high-speed wireless links, we can form a collaborative sensing and information environment where every device can be a sensing node.”

Named in honor of radio pioneer Guglielmo Marconi, the Marconi Society envisions a world in which all people can create opportunity through the benefits of connectivity. Its Paul Baran Young Scholar Awards recognize researchers 27 years old or younger — Marconi’s age when he made his first successful wireless transmission — who have shown extraordinary technical acumen, creativity and promise for using information and communications technology in service of digital inclusion. Ghasempour is one of three 2020 recipients announced today.

In wireless networks, equipment that operates at higher frequencies can transmit higher volumes of data in less time. One terahertz equals 1,000 gigahertz, which means a terahertz network operates at a frequency almost 20 times higher than today’s fastest Wi-Fi modems.

Connecting to today’s wireless networks is simple because receivers for these networks — typically modems — broadcast signals in all directions, and these omnidirectional signals are easily found by mobile phones, computers and other devices. While terahertz networks promise a huge increase in speed to support applications such as device-free heart rate monitoring, wireless virtual reality and real-time safety applications for autonomous vehicles, it is challenging to connect devices at such high frequencies.

“At higher frequencies, we have exponentially higher energy loss that requires the use of directional narrow beams instead of omnidirectional transmissions,” Ghasempour said. “These narrower beams make it challenging for devices to find each other. In addition, devices need to continuously align their directional beams to stay connected while moving. We have to allow this continual alignment in a way that does not disrupt the connection.”

Ghasempour uses sensing to establish and maintain connections between devices and the network.

“With my technology, we can create a next-generation Internet of Things by interweaving many more devices — thousands of times more than are connected to today’s wireless web — and providing them with faster streams of data,” she said.

Marconi Society Chair Vint Cerf said, “Yasaman’s focus on designing fast, affordable internet with minimal device cost and power consumption is key to connecting the next billion users. We are proud to welcome her to the Marconi Society and look forward to her continued innovations as an assistant professor at Princeton University.”

This release can be found online at