Gemini South's high-def version of 'A Star is Born' 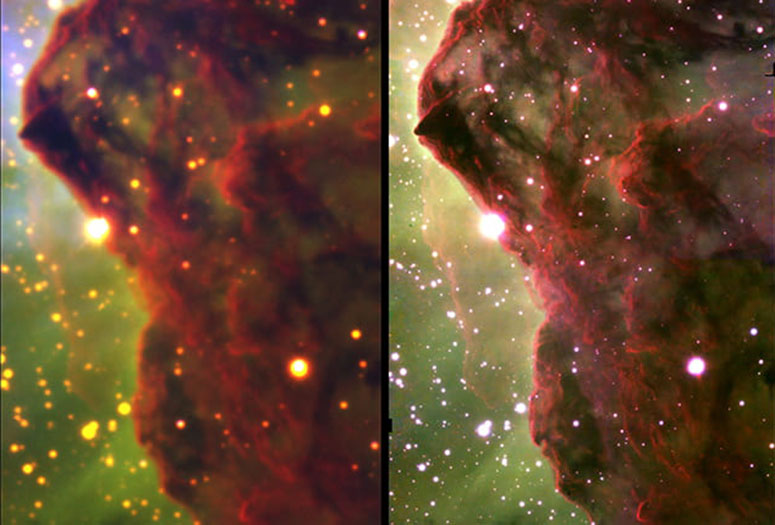 HOUSTON ­– (Oct. 5, 2020) – NASA's James Webb Space Telescope is still more than a year from launching, but the Gemini South telescope in Chile has provided astronomers a glimpse of what the orbiting observatory should deliver.

Hartigan, Isella and Downes describe their work in a study published online this week in Astrophysical Journal Letters. Their images, gathered over 10 hours in January 2018 at the international Gemini Observatory, a program of the National Science Foundation's NOIRLab, show part of a molecular cloud about 7,500 light years from Earth. All stars, including Earth's sun, are thought to form within molecular clouds.

"The results are stunning," Hartigan said. "We see a wealth of detail never observed before along the edge of the cloud, including a long series of parallel ridges that may be produced by a magnetic field, a remarkable almost perfectly smooth sine wave and fragments at the top that appear to be in the process of being sheared off the cloud by a strong wind."

The images show a cloud of dust and gas in the Carina Nebula known as the Western Wall. The cloud's surface is slowly evaporating in the intense glow of radiation from a nearby cluster of massive young stars. The radiation causes hydrogen to glow with near-infrared light, and specially designed filters allowed the astronomers to capture separate images of hydrogen at the cloud's surface and hydrogen that was evaporating.

An additional filter captured starlight reflected from dust, and combining the images allowed Hartigan, Isella and Downes to visualize how the cloud and cluster are interacting. Hartigan has previously observed the Western Wall with other NOIRLab telescopes and said it was a prime choice to follow up with Gemini's adaptive optics system.

"This region is probably the best example in the sky of an irradiated interface," he said. "The new images of it are so much sharper than anything we've previously seen. They provide the clearest view to date of how massive young stars affect their surroundings and influence star and planet formation."

Images of star-forming regions taken from Earth are usually blurred by turbulence in the atmosphere. Placing telescopes in orbit eliminates that problem. And one of the Hubble Space Telescope's most iconic photographs, 1995's "Pillars of Creation," captured the grandeur of dust columns in a star-forming region. But the beauty of the image belied Hubble's weakness for studying molecular clouds.

"Hubble operates at optical and ultraviolet wavelengths that are blocked by dust in star-forming regions like these," Hartigan said.

Because near-infrared light penetrates the outer layers of dust in molecular clouds, near-infrared cameras like the Gemini South Adaptive Optics Imager can see what lies beneath. Unlike traditional infrared cameras, Gemini South's imager uses "a mirror that changes its shape to correct for shimmering in our atmosphere," Hartigan said. The result: photos with roughly 10 times the resolution of images taken from ground-based telescopes that don’t use adaptive optics.

But the atmosphere causes more than blur. Water vapor, carbon dioxide and other atmospheric gases absorb some parts of the near-infrared spectrum before it reaches the ground.

The advantages of each technique bode well for the study of star formation, he said.

"Structures like the Western Wall are going to be rich hunting grounds for both Webb and ground-based telescopes with adaptive optics like Gemini South," Hartigan said. "Each will pierce the dust shrouds and reveal new information about the birth of stars."

The research was supported by Rice University.

https://news-network.rice.edu/news/files/2020/08/0831-CARINA-AOcomparison-lg.jpg
CAPTION: Two near-infrared composite images showing a 33 trillion-mile section of the Western Wall, a cloud of gas and dust in a star-forming region of the Carina Nebula. Each image was taken by Rice University astronomer Patrick Hartigan and colleagues from telescopes at the National Science Foundation's NOIRLab observatory in Chile and shows hydrogen molecules at the cloud's surface (red) and hydrogen atoms evaporating from the surface (green). The left-hand image was taken with the four-meter Blanco telescope's Wide-Field Infrared Imager in 2015. The right-hand image was taken with the 8.1-meter Gemini South telescope's wide-field adaptive optics imager in January 2018 and has about 10 times finer resolution thanks to a mirror that changes shape to correct for atmospheric distortion. (Images courtesy of P. Hartigan/Rice University)

https://upload.wikimedia.org/wikipedia/commons/5/5d/Sunset_Over_Gemini_South_and_the_LSST.jpg
CAPTION: The Gemini South telescope is located at about 8,900 feet elevation on Cerro Pachón, a mountain near Vicuña, Chile. (Photo courtesy of Wikimedia Commons)

Located on a 300-acre forested campus in Houston, Rice University is consistently ranked among the nation’s top 20 universities by U.S. News & World Report. Rice has highly respected schools of Architecture, Business, Continuing Studies, Engineering, Humanities, Music, Natural Sciences and Social Sciences and is home to the Baker Institute for Public Policy. With 3,978 undergraduates and 3,192 graduate students, Rice’s undergraduate student-to-faculty ratio is just under 6-to-1. Its residential college system builds close-knit communities and lifelong friendships, just one reason why Rice is ranked No. 1 for lots of race/class interaction and No. 4 for quality of life by the Princeton Review. Rice is also rated as a best value among private universities by Kiplinger’s Personal Finance.