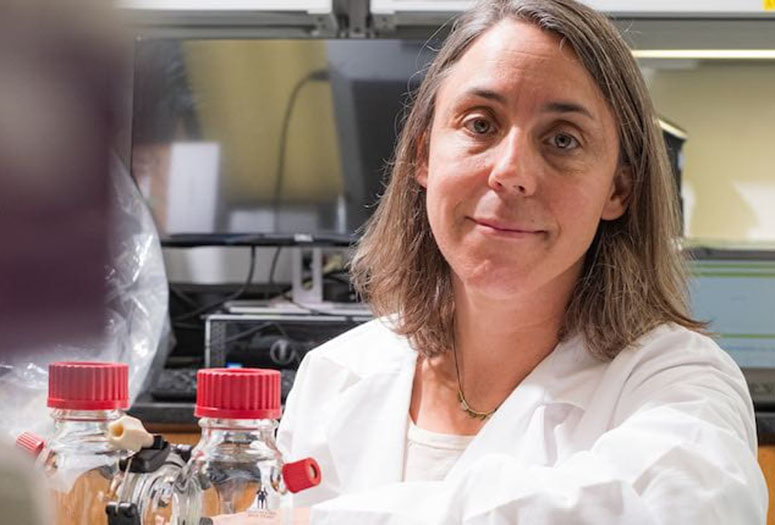 HOUSTON – (Jan. 22, 2020) – A $6 million grant to Rice by the Cancer Prevention and Research Institute of Texas (CPRIT) has succeeded in bringing new blood to the university’s growing bioscience initiative.

Caroline Ajo-Franklin, an established biophysicist and synthetic biologist at the Lawrence Berkeley National Laboratory in California, has joined Rice’s Department of BioSciences as a professor.

Ajo-Franklin explores the nanoscale interface between living microbes and inorganic materials, particularly mechanisms that facilitate charge transfer, and the assembly of materials at that interface. She is expected to be a key member of the university’s Systems, Synthetic and Physical Biology program, which includes faculty in the Wiess School of Natural Sciences and Brown School of Engineering.

The culture of collaboration at Rice and with Texas Medical Center institutions -- a key goal of the Vision for the Second Century, Second Decade -- and the chance to expand her research in new directions were a strong draw, she said.

“The idea of coming to Rice was really attractive because there's been such a push in synthetic biology,” said Ajo-Franklin, who joined the university last August in anticipation of the grant. “I saw an opportunity to help grow an excellent set of young assistant professors, with some more established faculty, into a really top-notch program.”

One cancer-related direction Ajo-Franklin expects to explore is the development of sensors that monitor chemotherapy agents in the body in real time. Two new studies from her Lawrence Berkeley lab point in that direction, she said.

In one published in Biotechnology and Bioengineering, she and her team made protein arrays that self-assemble into 3D bionanomaterials, Lego-like structures that can be programmed for use as catalysts, optical metamaterials and sensors.

“Bacteria use these proteins like armor,” Ajo-Franklin said. “If you look at the surface of bacteria, there’s this beautiful, repetitive structure all over. When we peel it off, it literally looks like chain mail, and that’s what we use to build layered materials.

“Because these proteins have been subject to evolution, we find they’re incredibly robust,” she said.

In the other study, which appeared in the American Chemical Society’s ACS Synthetic Biology, the team increased the bioelectronic performance of genetically engineered bacteria by manipulating a protein, CcmH, that controls the expression of a key type of extracellular electron transfer protein. In experiments with E. coli, the researchers were able to increase the flow of electrons to an electrode up to 77% or decrease it by 66%. They found that electron flow could be adjusted with even a single-point mutation in CcmH.

Graduate student Lin Su, who came to Rice with Ajo-Franklin’s lab and is lead author of the study, said the work should lead to new opportunities to interface with biological systems. “I think it will be very powerful for biosensing, or you can use it in biosynthesis to control the behavior of different bacteria, either in the environment or the human gut,” he said.

Ajo-Franklin said the projects represent separate branches of her endeavors that she hopes to bring together at Rice. “These papers are sort of two halves of my work,” she said. “One is engineering biology to make materials, and the other is using biology to communicate with materials.

“We dream of being able to have bacteria make entire bioelectronic devices,” Ajo-Franklin said. “Imagine having bacteria seed something that doesn't look like an iPhone but has some of the functionality of electronic devices. It’s hopefully a more sustainable way of making devices, and one that requires less energy.”

The grant to Rice was part of $38 million in funding announced Nov. 20 to recruit cancer researchers to Texas institutions.

Caroline Ajo-Franklin joined Rice University as a professor of biosciences with funding from the Cancer Prevention and Research Institute of Texas. (Credit: Jeff Fitlow/Rice University)