Pollutant-destroying properties surprise Rice engineer: 'It's not supposed to work' 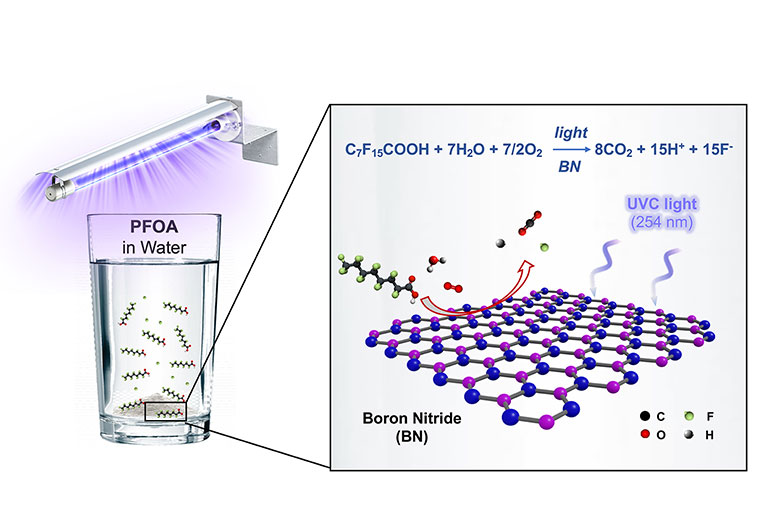 "It was the control," said Rice Professor Michael Wong, referring to the part of a scientific experiment where researchers don't expect surprises. The control group is the yardstick of experimental science, the baseline by which variables are measured.

"We haven't yet tested this at a full scale, but in our benchtop tests in the lab, we could get rid of 99% of PFOA in four hours," Wong said of boron nitride, the light-activated catalyst he and his students stumbled upon and spent more than a year testing.

Their study, which is available online in the American Chemical Society journal Environmental Science and Technology Letters, found boron nitride destroyed PFOA (perfluorooctanoic acid) at a faster clip than any previously reported photocatalyst. PFOA is one of the most prevalent PFAS (perfluoroalkyl and polyfluoroalkyl substances), a family of more than 4,000 compounds developed in the 20th century to make coatings for waterproof clothing, food packaging, nonstick pans and countless other uses. PFAS have been dubbed forever chemicals for their tendency to linger in the environment, and scientists have found them in the blood of virtually all Americans, including newborns.

Catalysts are Wong's specialty. They are compounds that bring about chemical reactions without taking part or being consumed in those reactions. His lab has created catalysts for destroying a number of pollutants, including TCE and nitrates, and he said he tasked his team with finding new catalysts to address PFAS about 18 months ago.

"We tried a lot of things," Wong said. "We tried several materials that I thought were going to work. None of them did. This wasn't supposed to work, and it did."

"There was literature that suggested one of them might be a photocatalyst, meaning it would be activated by light of a particular wavelength," Wong said. "We don't use light very often in our group, but I said, 'Let's go ahead and doodle around with it.' The sun is free energy. Let's see what we can do with light."

As before, none of the experimental groups performed well, but Duan noticed something unusual with the boron nitride control. She and Wang repeated the experiments numerous times to rule out unexpected errors, problems with sample preparation and other explanations for the strange result. They kept seeing the same thing.

"Here's the observation," Wong said. "You take a flask of water that contains some PFOA, you throw in your BN powder, and you seal it up. That's it. You don't need to add any hydrogen or purge it with oxygen. It's just the air we breathe, the contaminated water and the BN powder. You expose that to ultraviolet light, specifically to UV-C light with a wavelength of 254 nanometers, come back in four hours, and 99% of the PFOA has been transformed into fluoride, carbon dioxide and hydrogen."

The problem was the light. The 254-nanometer wavelength, which is commonly used in germicidal lamps, is too small to activate the bandgap in boron nitride. While that was unquestionably true, the experiments suggested it could not be.

So boron nitride was clearly absorbing the light and catalyzing a reaction that destroyed PFOA, despite that fact that it should have been optically impossible for boron nitride to absorb 254-nanometer UV-C light.

"It's not supposed to work," Wong said. "That's why no one ever thought to look for this, and that's why it took so long for us to publish the results. We needed some sort of explanation for this contradiction."

Wong said he, Duan, Wang and co-authors offered a plausible explanation in the study.

"We concluded that our material does absorb the 254-nanometer light, and it's because of atomic defects in our powder," he said. "The defects change the bandgap. They shrink it enough for the powder to absorb just enough light to create the reactive oxidizing species that chew up the PFOA."

Wong said more experimental evidence will be needed to confirm the explanation. But in light of the results with PFOA, he wondered if the boron nitride catalyst might also work on other PFAS compounds.

"So I asked my students to do one more thing," Wong said. "I had them replace PFOA in the tests with GenX."

GenX is also a forever chemical. When PFOA was banned, GenX was one of the most widely used chemicals to replace it. And a growing body of evidence suggests that GenX could be just as big an environmental problem as its predecessor.

"It's a similar story to PFOA," Wong said. "They're finding GenX everywhere now. But one difference between the two is that people have previously reported some success with catalysts for degrading PFOA. They haven't for GenX."

Wong and colleagues found that boron nitride powder also destroys GenX. The results weren't as good as with PFOA: With two hours exposure to 254-nanometer light, BN destroyed about 20% of the GenX in water samples. But Wong said the team has ideas about how to improve the catalyst for GenX.

"The research has been fun, a true team effort," Wong said. "We've filed patents on this, and NEWT's interest in further testing and development of the technology is a big vote of confidence."

The research was supported by the National Science Foundation (EEC-1449500) and the China Scholarship Council.

https://news-network.rice.edu/news/files/2020/07/0706_PHOTOCAT-fig2-lg.jpg
CAPTION: An illustration of the boron nitride photocatalysis that destroys the pollutant PFOA in water. (Image courtesy of M. Wong/Rice University)