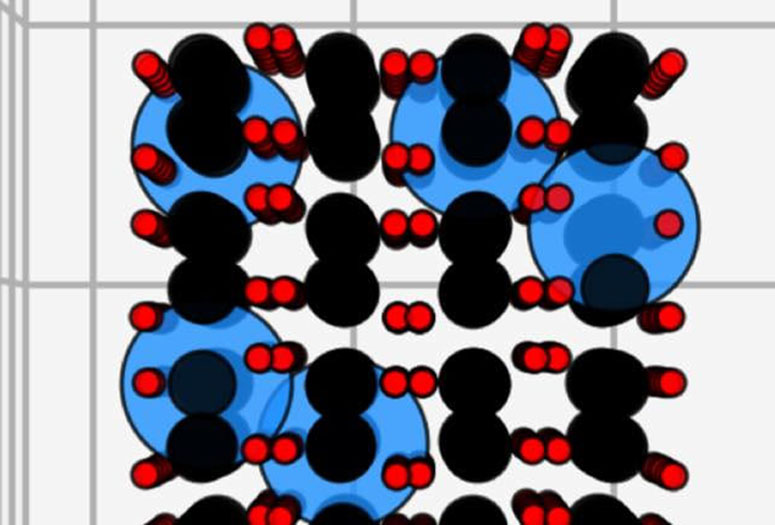 Their investigation showed the surprise electrical properties are due to electrons trapped in defects throughout the material, which is less than 10 nanometers thick. They characterize these charges as electrets, which appear in some insulating materials and generate internal and external electric fields.

Piezoelectricity is likewise a property of materials that respond to stress by generating an electric voltage across their surfaces or generate mechanical strain in response to an applied electric field. It has many practical and scientific uses, from the conversion of a wiggling guitar string into an electrical signal to scanning microscopes like those used to make the new finding.

The researchers at Rice’s Brown School of Engineering found their micron-scale flakes exhibit a piezoelectric response that is as strong as that observed in such conventional 2D piezoelectric materials as molybdenum disulfide.

The key appears to be defects that make molybdenum dioxide’s crystal lattice imperfect. When strained, the dipoles of electrons trapped in these defects seem to align, as with other piezoelectric materials, creating an electric field leading to the observed effect.

“Super thin, 2D crystals continue to show surprises, as in our study,” Ajayan said. “Defect engineering is a key to engineer properties of such materials but is often challenging and hard to control.”

“Molybdenum dioxide isn’t expected to show any piezoelectricity,” added Rice postdoctoral researcher Anand Puthirath, a co-corresponding author of the paper. “But because we’re making the material as thin as possible, confinement effects come into the picture.”

He said the effect appears in molybdenum dioxide flakes grown by chemical vapor deposition. Stopping the growth process at various points gave the researchers some control over the defects’ density, if not their distribution.

Puthirath said the material has many potential applications. “It can be used as an energy harvester, because if you strain this material, it will give you energy in the form of electricity,” he said. “If you give it voltage, you induce mechanical expansion or compression. And if you want to mobilize something at the nanoscale, you can simply apply voltage and this will expand and move that particle the way you want.”

Ajayan and Pradeep Sharma, the M.D. Anderson Chair Professor and department chair of mechanical engineering at the University of Houston, are co-corresponding authors. Ajayan is chair of Rice’s Department of Materials Science and NanoEngineering, the Benjamin M. and Mary Greenwood Anderson Professor in Engineering and a professor of chemistry.

The Air Force Office of Scientific Research and the Department of Energy's Office of Science supported the research. Microscopy research was performed at Oak Ridge National Laboratory’s Center for Nanophase Materials Sciences.

Electrets — electrons trapped in defects in two-dimensional molybdenum dioxide — give the material piezoelectric properties, according to Rice University researchers. The defects (blue) appear in the material during formation in a furnace, and generate an electric field when under pressure. (Credit: Ajayan Research Group/Rice University)