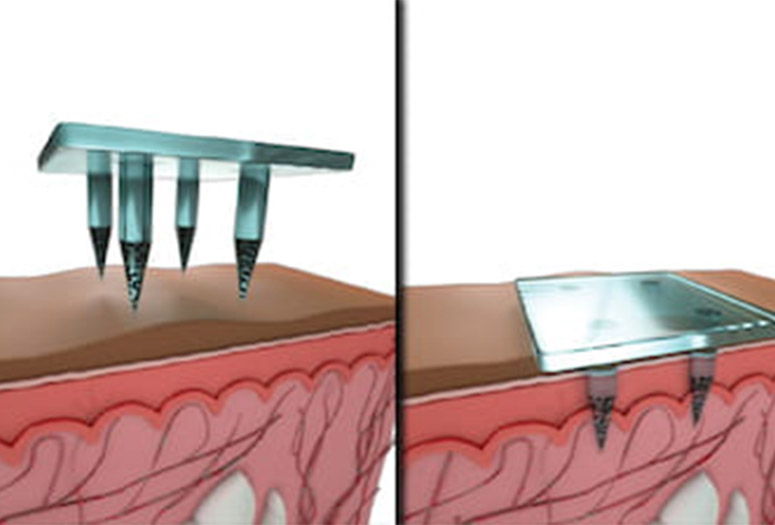 Keeping track of a child’s shots could be so much easier with technology invented by a new Rice University professor and his colleagues.

Kevin McHugh, an assistant professor of bioengineering at Rice since this summer, and a team at his previous institution, the Massachusetts Institute of Technology, report in a cover story in Science Translational Medicine on their development of quantum-dot tags that fluoresce with information after they’re injected as part of a vaccination.

The tags are incorporated in only some of the array of sugar-based microneedles on a patch. When the needles dissolve in about two minutes, they deliver the vaccine and leave the pattern of tags just under the skin, where they become something like a bar-code tattoo.

Instead of ink, this highly specific medical record consists of copper-based quantum dots embedded in biocompatible, micron-scale capsules. Their near-infrared dye is invisible, but the pattern they set can be read and interpreted by a customized smartphone.

The two-year project is aimed at the 1.5 million preventable deaths that result from a lack of vaccinations, primarily in developing nations.

“The Bill and Melinda Gates Foundation came to us and said, ‘Hey, we have a real problem — knowing who’s vaccinated,’” said McHugh, who was recruited to join Rice with funding from the Cancer Prevention and Research Institute of Texas. “They said, ‘We go on vaccination campaigns where people get into Hummers, drive to a rural village, set up a tent and start immunizing people, but they don’t always know who’s been immunized before and what vaccines are still needed.”

Parents often don’t know their children’s vaccination histories, McHugh said. “So our idea was to put the record on the person,” he said. “This way, later on, people can scan over the area to see what vaccines have been administered and give only the ones still needed.

“There are two sides to this,” he said. “First, is that you don’t administer unnecessary vaccines, which has a cost. But even bigger, you don’t leave people underimmunized and at risk of getting an infectious disease.”

McHugh said the team worked with a bioethicist to be sure the patients’ data remains protected. “She said we’re on solid ethical ground as long as people can opt out, like getting the patch with only the vaccine. Also, the patch with quantum dots only contains information about the vaccine received. It doesn’t tell you anything else about the person.”

The square-centimeter patches hold up to 16 tiny needles. “They don’t go very deep, which makes them theoretically painless and a lot easier for kids,” McHugh said. “They’re like putting on a bandage.”

Because the 1.5-millimeter needles disintegrate in the skin, no biohazardous sharps remain for disposal, he said. Testing in model skin in strong light showed the 4-nanometer dots should be readable for at least five years.

McHugh plans to continue his work on the technology at Rice. “There are so many aspects to this particular project that we need nanotechnologists, bacteriologists, chemists and computer scientists,” he said. “So this is certainly something I’m thinking about for my lab here.”