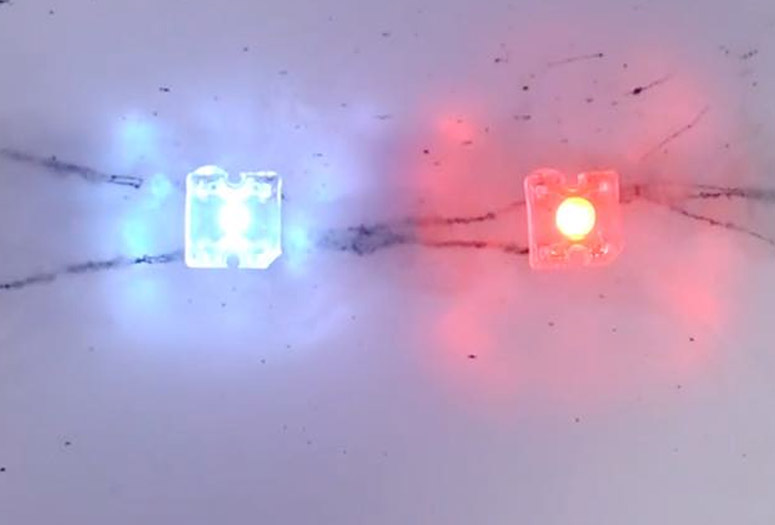 HOUSTON – (April 14, 2016) – Scientists at Rice University have discovered that the strong force field emitted by a Tesla coil causes carbon nanotubes to self-assemble into long wires, a phenomenon they call “Teslaphoresis.”

The team led by Rice chemist Paul Cherukuri reported its results this week in ACS Nano.

Cherukuri sees this research as setting a clear path toward scalable assembly of nanotubes from the bottom up.

The system works by remotely oscillating positive and negative charges in each nanotube, causing them to chain together into long wires. Cherukuri’s specially designed Tesla coil even generates a tractor beam-like effect as nanotube wires are pulled toward the coil over long distances.

This force-field effect on matter had never been observed on such a large scale, Cherukuri said, and the phenomenon was unknown to Nikola Tesla, who invented the coil in 1891 with the intention of delivering wireless electrical energy.

“Electric fields have been used to move small objects, but only over ultrashort distances,” Cherukuri said. “With Teslaphoresis, we have the ability to massively scale up force fields to move matter remotely.”

The researchers discovered that the phenomenon simultaneously assembles and powers circuits that harvest energy from the field. In one experiment, nanotubes assembled themselves into wires, formed a circuit connecting two LEDs and then absorbed energy from the Tesla coil’s field to light them.

Cherukuri realized a redesigned Tesla coil could create a powerful force field at distances far greater than anyone imagined. His team observed alignment and movement of the nanotubes several feet away from the coil. “It is such a stunning thing to watch these nanotubes come alive and stitch themselves into wires on the other side of the room,” he said.

Nanotubes were a natural first test material, given their heritage at Rice, where the HiPco production process was invented. But the researchers envision many other nanomaterials can be assembled as well.

Lindsey Bornhoeft, the paper’s lead author and a biomedical engineering graduate student at Texas A&M University, said the directed force field from the bench-top coil at Rice is restricted to just a few feet. To examine the effects on matter at greater distances would require larger systems that are under development. Cherukuri suggested patterned surfaces and multiple Tesla coil systems could create more complex self-assembling circuits from nanoscale-sized particles.

Cherukuri and his wife, Tonya, also a Rice alum and a co-author of the paper, noted that their son Adam made some remarkable observations while watching videos of the experiment. “I was surprised that he noticed patterns in nanotube movements that I didn’t see,” Cherukuri said. “I couldn’t make him an author on the paper, but both he and his little brother John are acknowledged for helpful discussions.”

Cherukuri knows the value of youthful observation – and imagination – since he started designing Tesla coils as a teen. “I would have never thought, as a 14-year-old kid building coils, that it was going to be useful someday,” he said.

Cherukuri and his team self-funded the work, which he said made it more meaningful for the group. “This was one of the most exciting projects I’ve ever done, made even more so because it was an all-volunteer group of passionate scientists and students. But because Rice has this wonderful culture of unconventional wisdom, we were able to make an amazing discovery that pushes the frontiers of nanoscience.”

The teammates look forward to seeing where their research leads. “These nanotube wires grow and act like nerves, and controlled assembly of nanomaterials from the bottom up may be used as a template for applications in regenerative medicine,” Bornhoeft said.

“There are so many applications where one could utilize strong force fields to control the behavior of matter in both biological and artificial systems,” Cherukuri said. “And even more exciting is how much fundamental physics and chemistry we are discovering as we move along. This really is just the first act in an amazing story.”

Co-authors are Rice senior Aida Castillo; Rice research scientists Carter Kittrell, Dustin James and Bruce Brinson; Rice Distinguished Faculty Fellow Bruce Johnson; Thomas Rybolt, chemistry department head and the UC Foundation Professor at the University of Tennessee-Chattanooga; and Preston Smalley of the Second Baptist School in Houston, who worked on the project as a summer intern at Rice. Cherukuri and Bornhoeft began the project while both were at the University of Tennessee-Chattanooga.

Nanotube wires self-assemble under the influence of a directed electric field from the Tesla coil. The effect was discovered by scientists at Rice University, who call it Teslaphoresis. (Credit: Jeff Fitlow/Rice University)

Nanotube assemblies are drawn to the source of a Tesla field in an experiment at a Rice University lab. (Credit: Jeff Fitlow/Rice University)

Rice University chemist Paul Cherukuri, left, and Texas A&M graduate student Lindsey Bornhoeft line up an experiment with nanotubes and a customized Tesla coil at Rice. They led a team that developed Teslaphoresis, a phenomenon able to assemble nanoparticles into a wire from a distance. (Credit: Jeff Fitlow/Rice University)

Located on a 300-acre forested campus in Houston, Rice University is consistently ranked among the nation’s top 20 universities by U.S. News & World Report. Rice has highly respected schools of Architecture, Business, Continuing Studies, Engineering, Humanities, Music, Natural Sciences and Social Sciences and is home to the Baker Institute for Public Policy. With 3,910 undergraduates and 2,809 graduate students, Rice’s undergraduate student-to-faculty ratio is 6-to-1. Its residential college system builds close-knit communities and lifelong friendships, just one reason why Rice is ranked No. 1 for best quality of life and for lots of race/class interaction by the Princeton Review. Rice is also rated as a best value among private universities by Kiplinger’s Personal Finance. To read “What they’re saying about Rice,” go to http://tinyurl.com/AboutRiceUniversity.