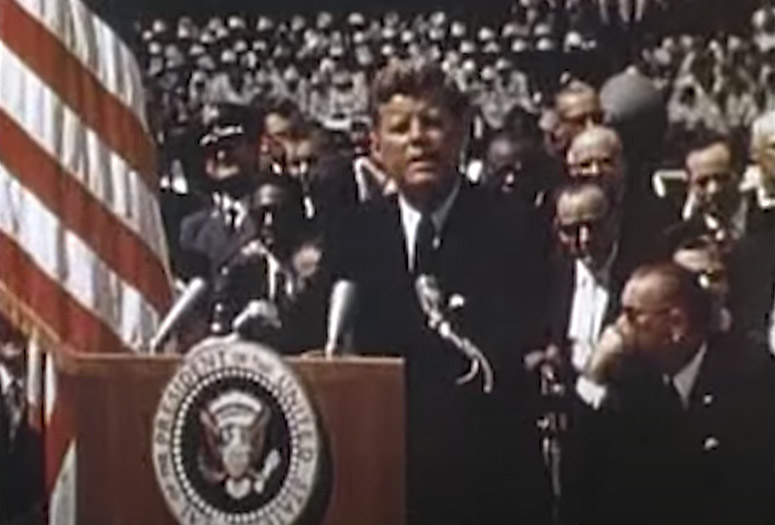 The speech marked a turning point for Rice, the city of Houston, the nation and the world. Globally, the space race played out against the backdrop of the Cold War, and in the U.S. the space program shared headlines with the Vietnam War and the struggle for civil rights. In Houston, NASA would pump more than $1 billion into the local economy in the 1960s and help the city blossom into the nation’s fourth-largest metropolis.

In a tribute to Apollo 11 astronaut Neil Armstrong this week, Rice alum Paul Burka ’63, executive editor of Texas Monthly magazine, published the verbatim text of Kennedy’s speech in his blog. Burka, who was at Rice Stadium that day, said the speech “speaks to the way Americans viewed the future in those days. It is a great speech, one that encapsulates all of recorded history and seeks to set it in the history of our own time. Unlike today’s politicians, Kennedy spoke to our best impulses as a nation, not our worst.”

Kennedy spoke at the stadium at 10 a.m. Sept. 12. It was a warm, sunny day, and fall classes were not yet under way. Rice’s incoming freshmen were on campus for orientation, but many of the estimated 40,000 spectators were Houston school children, said Rice Centennial Historian Melissa Kean.

Kennedy told the audience that the United States intended to take the lead in spaceflight, both to ensure that the Soviet Union did not base strategic weapons in space and because space exploration “is one of the great adventures of all time, and no nation which expects to be the leader of other nations can expect to stay behind in the race for space.”

The best-known line from the speech — “We choose to go to the moon!” — earned a thunderous ovation, in part because of Kennedy’s clever oratory. He played to the hometown crowd with the preceding line, “Why does Rice play Texas?” — a line that Kennedy jotted between the lines of the typed copy prepared by White House aide Ted Sorensen.

In its front-page coverage of the speech, the Rice Thresher made note of this line and others. The paper reported that the speech capped a two-day visit to Houston in which Kennedy toured facilities at the Manned Spacecraft Center (now Johnson Space Center), and the Thresher referred to the costly nature of the space program by citing the $5.4 billion annual NASA budget, a figure Kennedy also used in the speech.

The number impressed chemist Robert Curl ’54, one of many faculty members at the stadium.

“I came away in wonder that he was seriously proposing this,” said Curl, Rice’s Pitzer-Schlumberger Professor Emeritus of Natural Sciences and professor emeritus of chemistry. “It seemed like an enormous amount of money to spend on an exploration program. It was an impressive amount of money back then, and if you adjust for inflation, the Apollo program cost more than the LHC today.”

Curl said Kennedy’s vision paid off for NASA and Houston when Apollo 11 landed on the moon less than eight years later.

Sass and Curl each said Kennedy’s speech seemed no more remarkable at the time than the 1960 speech by President Eisenhower at Autry Court. Today, Eisenhower’s speech is largely forgotten, and Kennedy’s is still frequently cited in the news.

Sass said part of the enduring appeal of Kennedy’s speech is the magnitude of what he proposed, something Sass said he has come to appreciate more with age.

“It didn’t seem outlandish to me at the time,” Sass said. “I was young, and I thought you could do just about anything.”