Revolution with a salad spinner 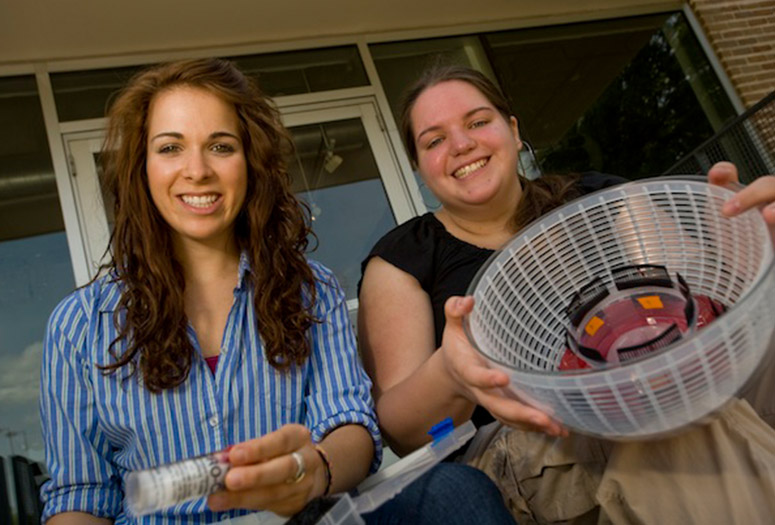 A simple salad spinner will save lives this summer, if everything goes as planned by two Rice University undergraduates.

The spinner has been turned, so to speak, into a rudimentary centrifuge that medical clinics in developing countries can use to separate blood without electricity.

Rice sophomore Lila Kerr and freshman Lauren Theis will take their Sally Centrifuge abroad for nearly two months this summer as part of Beyond Traditional Borders (BTB), Rice’s global health initiative that brings new ideas and technologies to underdeveloped countries. Kerr will take a spinner to Ecuador in late May, Theis will take one to Swaziland in early June and a third BTB team will take one to Malawi, also in June. Such field testing is important to Rice students as they develop a range of tools to enhance global health.

Kerr and Theis are minoring in global health technologies and took the Introduction to Bioengineering and World Health class taught by Rebecca Richards-Kortum, Rice’s Stanley C. Moore Professor, chair of the Department of Bioengineering and director of Rice 360˚: Institute for Global Health Technologies.

“There was a whole range of projects to take on this year, and luckily we got one that wasn’t terribly engineering-intensive,” said Kerr, a sociology major from Dayton, Ohio.

“We were essentially told we need to find a way to diagnose anemia without power, without it being very costly and with a portable device,” added Theis, a political science major and native of San Antonio, Texas.

They found that a salad spinner met those criteria. When tiny capillary tubes that contain about 15 microliters of blood are spun in the device for 10 minutes, the blood separates into heavier red blood cells and lighter plasma. The hematocrit, or ratio of red blood cells to the total volume, measured with a gauge held up to the tube, can tell clinicians if a patient is anemic. That detail is critical for diagnosing malnutrition, tuberculosis, HIV/AIDS and malaria.

“The students really did an amazing job of taking very simple, low-cost materials and creating a device their research shows correlates nicely with hematocrit levels in the blood,” said Maria Oden, professor in the practice of engineering education and director of Rice’s Oshman Engineering Design Kitchen (OEDK). She was the team’s co-adviser with Richards-Kortum. “Many of the patients seen in developing world clinics are anemic, and it’s a severe health problem. Being able to diagnose it with no power, with a device that’s extremely lightweight, is very valuable,” she said.

Kerr said the device spins tubes at up to 950 rpm. Results with the push-pump spinner compare favorably to those obtained with the ZIPocrit, a miniature, battery-powered centrifuge used as part of Rice’s Lab-in-a-Backpack project. The ZIPocrit spins up to 10,000 rpm and completes its task in four to five minutes.

But the manual Sally Centrifuge, named in honor of a landmark known as the Sallyport on the Rice campus, has other advantages.

First, it requires no electricity — just a bit of muscle. “We’ve pumped it for 20 minutes with no problem,” Theis said. “Ten minutes is a breeze.”

Second, it can spin up to 30 tubes at a time versus the ZIPocrit’s maximum of four.

Third, it has proven to be fairly robust. “It’s all plastic and pretty durable,” Kerr said. “We haven’t brought it overseas yet, of course, but we’ve trekked it back and forth across campus in our backpacks and grocery bags and it’s held up fine.”

The centrifuge, assembled using plastic lids, cut-up combs, yogurt containers and a hot-glue gun, costs about $30 in parts, including the spinner. The students expect to continue work on the device after their summer treks.